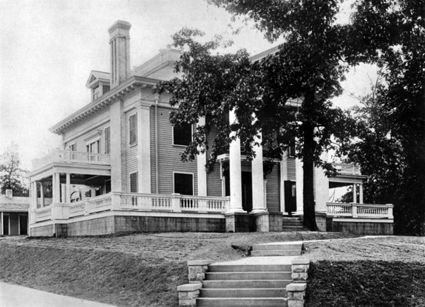 The William Rushton residence was a Greek Revival-style mansion built in 1906 for William J. Rushton Sr at 2900 Highland Avenue, on the northeast corner of the intersection with Iroquois Street (29th Street South). The rectangular 2-story house sat atop a broad terrace surrounded with a heavy wood balustrade. The front pediment was supported on four massive 2-story columns while the side porches were supported on smaller paired columns and had flat roof terraces above.

Before the house was completed, a fire broke out, forcing most of the house to be rebuilt from the foundation. A carriage house and stable occupied the rear of the property.

After Rushton's death in 1922 the family sold the house to John Crouch. Crouch sold it to D. M. "Mac" Drennen, president of Drennen Bros. mercantile, and it passed it to his son Houston Drennen at his death in December 1914. Houston's widow Sue Drennen left the property to St Mary's on-the-Highlands Episcopal Church when she died. The house was subsequently torn down.

A postwar apartment building currently occupies the site. The stone stairs on the corner of Highland and 29th remain from the original 1906 construction.