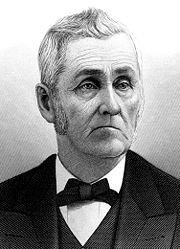 William Augustus Walker (born February 23, 1811 in Mecklenberg County, North Carolina; died March 21, 1890 in Elyton) was a farmer and merchant in Jefferson County before the Civil War.

Walker was the oldest of eight children born to Richard B. and Ann Flanagan Walker of North Carolina. The family moved into Madison County, Missouri in 1819 and then to Jefferson County, Alabama in 1823, settling outside Elyton, which had become the county seat just two years prior.

Walker worked his father's farm and attended school in the winters. One winter he caught a 7-foot-long panther in a steel trap he set in the forst. In 1827 the family resettled northward on land adjoining Five Mile Creek. In 1835 he began working a nearby plantation owned by George Green.

Later that year, Walker enlisted in a company raised to assist General Thomas Jesup in the Second Creek War. Though his unit never saw active duty, he was granted a land warrant of 80 acres in Illinois, which he sold to the Illinois Central Railroad in 1840 for $100. That same year he married Corilla Porter, with whom he eventually had six children, including the eminent attorney William Walker Jr.

Meanwhile, Walker returned to Elyton and clerked in a store owned by Abner Killough. In 1840 he began merchandising on his own, purchasing stock from Mobile, Charleston and New York. He built his own Greek Revivial mansion in Elyton in 1848. He kept his store open until 1862 when his lack of faith in Confederate currency gave him reason to retire to his large estate.

Walker was one of the ten landowners who sold property to the Elyton Land Company for the founding of Birmingham in 1871.

Walker died in 1890 and is buried at Oak Hill Cemetery.