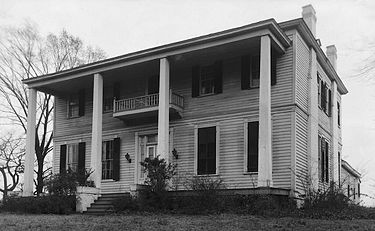 The Walker residence in 1937

The William Walker Sr residence was a Greek Revival house constructed in 1848 by William Walker Sr at 200 Broad Street in Elyton. The rectangular, hip-roofed mansion had four exterior brick chimneys serving eight rooms. Its two-story front porch was supported by large, tapered square wood columns. A gabled kitchen wing was attached at the rear of the house.

The interior of the house was divided by a wide passage with a balustraded stair. Moulding based on designs by Asher Benjamin were used throughout the house. The exterior was set off by a cluster of old oaks. Two graves, one of which bore the date 1819, were located on the grounds.

The house passed to Walker's descendent, Lucy Smith, and was occupied by Jack Smith in 1937 when it was photographed by Alex Bush for the Historic American Buildings Survey.