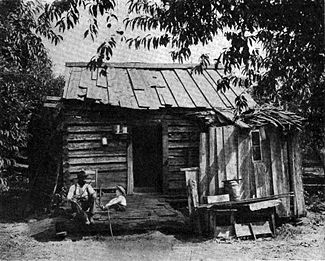 Originally worked by himself and his wife, Betsy, the operation grew to the point that, by 1860 Hawkins owned 150 slaves, which he employed to produce 100 bales of cotton, as well as other crops such as corn and peaches. He built his own Hawkins Mill to grind the corn and traded at the nearby commercial center of Elyton.

In 1865 a division of Wilson's army camped at the Hawkins plantation. When Major Shipman of the 1st Wisconsin Regiment reached the Hawkins Plantation in March 1865 he found the intact plantation "extensive and prosperous", but described its owner as "cranky and insolent". During their encampment the Union soldiers availed themselves of the farm and its products, using the mill to grind corn and confiscating a keg of peach brandy. General Edward McCook used the house as his staff headquarters during the encampment. After the war, Hawkins reported direct losses of over $16,600, not including the loss of slaves and the devaluation of his land.

Hawkins sold much of his land, for $4 an acre, to the Pioneer Mining and Manufacturing Company in 1886. It became the site of the Thomas Furnaces and, later, Wade Sand and Gravel.

in 1970 Betty Jane McGowen and Mrs A. J. Beaver relocated headstones from the family grave yard to Elyton Cemtery.