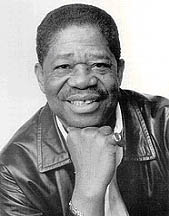 Burks grew up in Birmingham as the fourth of eight children. He left as a young man and served in the Air Force. He studied at the Columbia Liberal Arts College and University of Minnesota. He began his professional acting career in Minneapolis in the 1980s and appeared in scores of theatrical productions. He won two Vivian Robinson/AUDELCO awards for his work in New York City stage productions of "Saint Lucy's Eyes" and "Jitney". He also won an Obie and a Drama Desk Award for the latter play. He appeared in the 1997 films Sunday and Everything's Jake, and co-starred in the 2007 film King of California. He also appeared on television on "Without a Trace", "ER", "Law and Order", and "NYPD Blue". His other credits include voice-over work in the BBC Radio production of "Tradition" and in video game "The Chronicles of Riddick: Escape from Butcher Bay."

Burks died in 2010 at the age of 75. His memorial service was held at Greater New Macedonia Baptist Church on 31st Street North. He was survived by four children; Willis Burks III, Amy Burks-Jones, Europe A. Burks and Jessiah C. Styles.