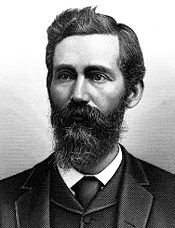 Willis Julian Milner (born May 3, 1842 in Pike County, Georgia; died February 17, 1921 in Birmingham) was a civil engineer who served as general manager for the Elyton Land Company. He was the designer of the Cahaba Pump Station engineer for numerous other development projects.

Milner was born in Georgia, the youngest son of gold prospector and railroad contractor Willis Joshua Milner. He was a student at Mercer University in Georgia when the Civil War began, and immediately entered the Confederate army as a first lieutenant in a company assigned to Escambia County, Florida. Eager for action, he resigned his officer's commission and enlisted as a private in the Clinch Rifles of the 5th Georgia Infantry. After two years active duty on the march, Milner was re-assigned and re-commissioned as 1st lieutenant to Company K of the 33rd Alabama Infantry. He suffered a slight wound at the Battle of Murfreesboro and, then, a more serious injury at Chickamauga. He was subsequently appointed to succeed his commander, then joined the staff of Lowery's brigade in Cleburne's Army of the Tennessee. When the 16th and 33rd Alabama regiments were merged, Milner was promoted to Major of the combined company. He took command after the Colonel and Lieutenant-Colonel fell in battle, remaining in that position at the time of Lee's surrender.

After the war, Milner made his way to the Greenville household of his brother-in-law, Henry M. Caldwell, becoming a partner in his drugstore. In October 1865 he married Gustrine C. Key of Lowndes County, with whom he had two children, Henry and May Clare. Another was born, but died in childhood.

In 1871 he and Caldwell attached themselves to the construction of the South and North Alabama Railroad. Soon thereafter he joined the Elyton Land Company as secretary and treasurer, remaining in those offices when Caldwell took over the presidency of the company in 1875. When the company decided to fund a water works, Milner was placed in charge of the project. He also oversaw the operations of the company's Birmingham Belt Railroad and Highland Avenue Railroad. He also managed the Lakeview Park resort which anchored the streetcar line.

In 1886 Milner partnered with William Kettig in the industrial supply business, forming the Milner & Kettig Company. Milner's son Henry joined the firm as a junior partner in 1888. The firm was sold to the Crane Company of Chicago, Illinois in 1905.

Milner resigned from his various positions with the company in 1901. He died in 1921 and is buried at Oak Hill Cemetery in Birmingham.