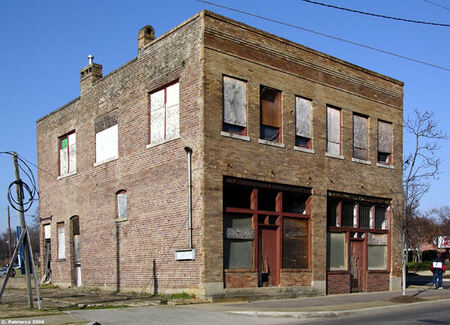 Windham Building from the southwest

The Windham Building located at 528 Reverend Abraham Woods Jr Boulevard (formerly 8th Avenue North) is located in the Smithfield neighborhood of the Smithfield community. Built in 1912, this two-story edifice is the oldest commercial building within the Smithfield Historic District. Constructed by Windham Construction and designed by Wallace Rayfield, Windham’s corporate offices moved here in 1917 and remained within the building until 1966. After Windham vacated the building, it was utilized by multiple small businesses.

Kamau Afrika purchased the building in 1983 and has done some work to stabilize it, however it remains vacant and subject to deterioration. Afrika would like to market the building as a minority business incubator. Bodile Nu Arts has proposed to rehabilitate it as a cultural arts center. The Alabama Historical Commission included it on its 2011 "Places in Peril" list.