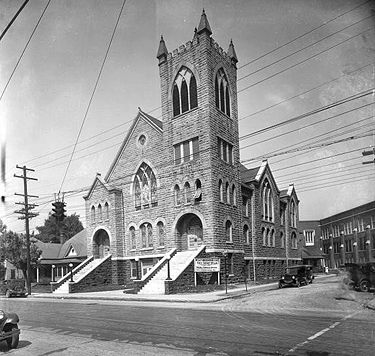 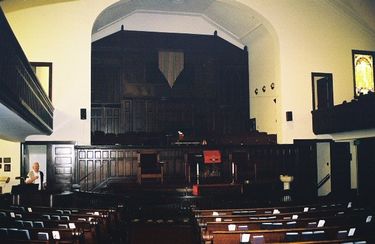 Woodlawn United Methodist Church, founded in 1887, is a United Methodist Church located at the corner of 1st Avenue North and 55th Street in Woodlawn. It was once one of the largest congregations in the North Alabama Conference, with around 2,500 members at its peak in the 1950s. The current pastor is Larry Horne, who leads a congregation of about 270 members with co-pastor Matt Lacey.

The church met in a wood-framed building for 25 years before constructing a large, limestone sanctuary in 1912. The first services were held in the new building on October 27 of that year, with a 60-voice choir and a string ensemble providing music. The building was constructed of gray limestone with a steep gabled roof and two monumental stairways giving access to the main floor from the street. A dark-stained wood balcony wrapped around three sides of the nave, which was divided by two main aisles. The much-acclaimed stained glass windows filled tall pointed-arch openings in the vaulted ceiling. The corner tower housed the church bells and was capped, at first, by a tall steeple roof. The steeple was replaced by a lower pyramidal roof before 1920. The front stairways were later reconfigured to accommodate the widening of 1st Avenue.

The congregation peaked at around 2,500 in the 1950s. During the 1960s, pastor John Rutland confronted church member and Birmingham City Commission member Bull Connor over his harsh rhetoric and actions against African American citizens. In 1983 a choir rehearsal was interrupted by a knife-wielding attacker who killed one choir member and injured two others.

The church provides space for Cornerstone Schools of Alabama, Outreach Incorporated, Youth Works, and the Woodlawn Christian Center as part of its community outreach ministry.

On the afternoon of May 31, 2009 a fire broke out in the church's basement just as a group from Bethel Metropolitan Community Church was beginning a communion service. All members of the group got out safely, but the church building could not be saved from the fire which quickly consumed the roof structure. The Birmingham Fire and Rescue Service was able to prevent the fire from spreading to adjacent buildings and to control the collapse of the church as they fought through the afternoon.

The church salvaged a few notable pieces of the building and its furnishings for reuse in its rebuilding effort. Ground was broken for a new multi-purpose sanctuary building on a nearby lot owned by the Cornerstone School on January 23, 2011. The new building includes a cafeteria and full-sized gymnasium, and several classrooms which are also used by the school. A joint-venture was created which owns and leases the facility to both organizations. The former site of the 1912 building was landscaped as a community garden.

The congregation met in the adjacent fellowship hall until rebuilding was completed. During the rebuilding process, many former members returned to worship with the congregation. The new sanctuary and classroom building opened on November 29, 2011.