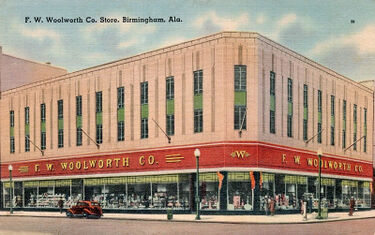 Postcard view of the Woolworth Building at 1901 3rd Avenue North in downtown Birmingham.

Woolworth's, originally the F. W. Woolworth Co., was a discount variety store chain founded in 1879 by Frank. W. Woolworth in Wilkes-Barre, Pennsylvania. It was the first "five and dime" operations, and one of the first retail chains to put its goods in front of customers to select for themselves, rather than having to present a list to a sales clerk.

The retailer was very successful, and its name was spread across the country through deals with several affiliated chain operators. Over time, the stores got larger and larger and incorporated lunch counters.

The chain went out of business in the United States in 1997.