From Bhamwiki
(Redirected from Wytasha Carter)
Jump to: navigation, search 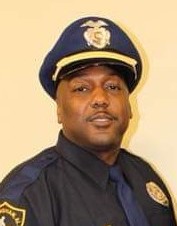 WyTasha Lamar Carter (born November 13, 1974 in Birmingham; died January 13, 2019 in Birmingham) was a sergeant in the Birmingham Police Department who was killed on duty.

Carter was the third of three children born to Ronald and Brenda Carter of Birmingham. He was a drum major for the Phillips High School marching band and graduated in 1993. He went on to study at Liberty University in Lynchburg, Virginia before enlisting in the U.S. Air Force in 1996. He was assigned to Offutt Air Force Base in Omaha, Nebraska where he met his wife, Tiphanie.

Carter joined the Birmingham Police Department on July 18, 2011 and has been assigned to the West Precinct, High Intensity Community Oriented Police Patrol (HICOPP), and as a school resource officer for the Youth Services Unit at Jackson-Olin High School and Woodlawn High School.

On April 14, 2016, Carter helped rescue two children trapped under the collapsed roof of a home in Bush Hills. He was promoted to sergeant on February 17, 2018.

Early in the morning of Sunday, January 13, 2019 Carter responded to a call for back-up when patrol officer Lucas Allums, working undercover to investigate car break-ins, saw two males appearing to try car door handles on the 900 block of 5th Avenue North, near the 4 Seasons Bar & Grill. They approached one of the suspects, Jeremy Elwin Owens, and began patting him down. When they found what they believed to be a weapon, they asked about it. Owens then grabbed his gun and began firing at the officers. Both were struck, and one of the suspects was wounded by return fire. All three were taken to UAB Hospital where Carter was pronounced dead and Allums spent nine days in intensive care for a critical injury. A second 18-year-old suspect was taken into custody at the scene but later released without being charged. Owens was formally charged on January 25 and released from hospital care to police custody in early February. The Alabama Law Enforcement Agency is reviewing the incident.

Carter was survived by his wife, Tiphanie, and their two children. His funeral services were held at Legacy Arena and he was buried at Elmwood Cemetery. State representative Allen Treadaway introduced a joint resolution to the Alabama State Legislature in April 2019 naming the section of I-20/59 between mile markers 127 and 128 as the "Sergeant Wytasha L. Carter Memorial Highway".