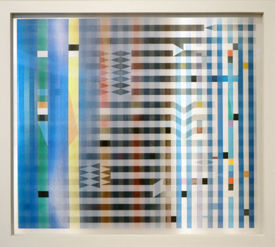 Yaacov Agam (born 1928) is an internationally-recognized Israeli artist known for his kinetic work. His best known work in Birmingham is "Complex Vision" (1969) on the facade of the Callahan Eye Foundation Hospital on University Boulevard.

Other Agam works in Birmingham include the similar chrome steel interactive sculptures, "Superline Volume" (1968) and "Touch Me" (1970-73), both donated to the Birmingham Museum of Art by Caroline Ireland and displayed on the grounds outside the museum. A 1979 small-scale lenticular work, similar to Complex Vision, and entitled "Birmingham", is in the University of Alabama at Birmingham's Permanent Art Collection.