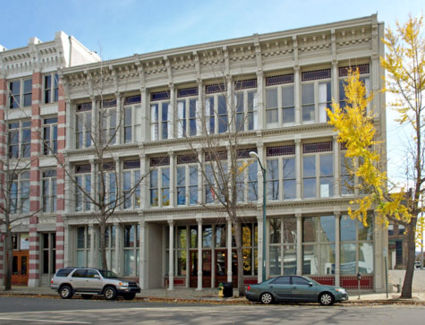 The Zinszer Building is a three-story commercial building with a Victorian cast-iron facade located at 2115-2117 2nd Avenue North in downtown Birmingham. It was constructed in 1889 by Peter Zinszer for his "Peter Zinszer's Mammoth Furniture House" retail business. After his death in 1894 the business passed to his widow, Rosa, who operated it for another decade.

The 30,497 square-foot building continued to serve as a furniture showroom through the 1970s, most recently as Beard Furniture. The building, considered the finest of the two surviving examples of Victorian cast-iron facades in Birmingham, was placed on the National Register of Historic Places on October 23, 1980. It is also a contributing structure to the Downtown Birmingham Historic District, placed on the National Register in 1992.

In 1983 then-owners Allen Haskell, John Beard, and Frank Yielding applied for a permit to demolish the building for surface parking. Birmingham Director of Urban Design Mike Dobbins alerted Operation New Birmingham's Michael Calvert of the application and his group successfully lobbied the owners to withdraw the proposal. Instead the building was sold to the Historical Preservation Authority of the City of Birmingham. The cast-iron facade was restored by Robinson Iron under the auspices of that authority in late 1985, and the interior was renovated for use as offices. Kidd Plosser Sprague designed the renovations, which were completed in 1986.

The law firm of Spain, Gillon, Tate, Grooms & Blan and Arlington Properties moved their offices into the building by 1987. Spain & Gillon purchased the property from the Historical Preservation Authority in 2001.

Spain & Gillon put on the market in April 2017 for $3.4 million as the firm relocated to the Financial Center.

In January 2020 the Zinszer Building and an adjoining 12-space parking lot were sold to a group affiliated with the Birmingham office of Colliers International for just over $2 million. The new owners plan to leverage Opportunity Zone and Historic Preservation Tax Credits to help finance a $3 million update and renovation. Designform architects and RaderMcCary contractors were selected for the project, which involved removing a mezzanine between the first and second floors.

Montgomery Entities relocated its Tarrant corporate offices to the building.