Difference between revisions of "1905"

1905 was the 34th year after the founding of the city of Birmingham. 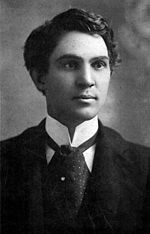 In 1905, the play The Scarlet Pimpernel opened at the New Theatre in London with a new final act. The Cullinan Diamond was found near Pretoria, South Africa. Rotary International was founded. President Theodore Roosevelt began a full term. Albert Einstein published his paper On a heuristic viewpoint concerning the production and transformation of light, in which he explained the photoelectric effect using the notion of light quanta. In India, the 1905 Kangra earthquake hit the Kangra valley, killed 20,000, and destroyed most buildings in Kangra, Mcleodganj and Dharamshala. Albert Einstein submitted his doctoral dissertation On the Motion of Small Particles..., in which he explained Brownian motion. Las Vegas was founded. Norway gained independence from Sweden. Albert Einstein published the article On the Electrodynamics of Moving Bodies where he revealed his theory of special relativity. The Canadian provinces of Alberta and Saskatchewan were established. Albert Einstein submitted his paper Does the Inertia of a Body Depend Upon Its Energy Content? in which he developed an argument for the famous equation E = mc². The Russo-Japanese War was ended with the Treaty of Portsmouth in New Hampshire. The Russian Revolution of 1905 took place, forcing Tsar Nicholas II to establish the Duma.