Difference between revisions of "1912"

1912 was the 41st year after the founding of the city of Birmingham. 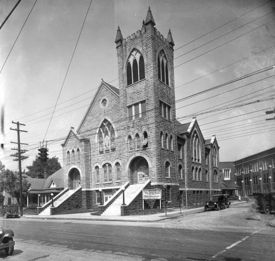 Woodlawn Methodist Church was completed in 1912

The year 1912 saw the formal establishment of the Republic of China. New Mexico became the 47th state; Arizona became the 48th. Captain Robert Falcon Scott and a team of four became the second expeditionary group to reach the South Pole. The Girl Scouts were founded by Juliette Gordon Low. The Mayor of Tokyo gave 3,000 cherry trees to be planted in Washington, D.C. The RMS Titanic sank, killing 1,517 passengers and crew. The Olympic Games took place in Stockholm, Sweden. The Novarupta volcano formed on the Alaska Peninsula. Emperor Meiji of Japan died and was succeeded by his son Yoshihito, who became Emperor Taishō. Woodrow Wilson defeated incumbent William Howard Taft and former president Theodore Roosevelt in the presidential election. The skull of paleoanthropological hoax Piltdown Man was presented to the Geological Society of London.

Notable fiction published in 1912 included The Lost World by Arthur Conan Doyle, Riders of the Purple Sage by Zane Grey, The Judgement by Franz Kafka, Death in Venice by Thomas Mann; Tarzan of the Apes by Edgar Rice Burroughs, and The Tale of Mr. Tod by Beatrix Potter.

Notable music released in 1912 included the premiere performance of Gustav Mahler's "Symphony No. 9" and the publication of W. C. Handy's "The Memphis Blues". Senator Elihu Root was awarded the Nobel Peace Prize for advocating the U.S. entry into World War I in opposition to the German Empire.