2004 was the 133rd year after the founding of the City of Birmingham. 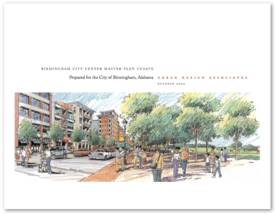 Cover of the "City Center Master Plan", presented in 2004

Notable films in 2004 included Shrek 2, Harry Potter and the Prisoner of Azkaban, Spider-Man 2, The Incredibles, and The Passion of the Christ. The Academy Award for Best Picture went to Million Dollar Baby, as did Best Director (Clint Eastwood) and Best Actress (Hilary Swank). Best Actor went to Jamie Foxx for Ray.

Notable pop music hits in 2004 included "Hey Ya!" by OutKast, "Yeah!" by Usher featuring Lil Jon and Ludacris, "Burn" by Usher, "Goodies" by Ciara featuring Petey Pablo, and "My Boo" by Usher & Alicia Keys. The Grammy Award for Album of the Year went to Outkast, who also won two other awards. Record of the Year was won by Coldplay for "Clocks". Song of the Year went to Luther Vandross by "Dance with My Father". Evanescence won Best New Artist. The big winner, however, was Beyoncé Knowles, who won 5 Awards.