From Bhamwiki
(Redirected from 700 A Condominium)
Jump to: navigation, search 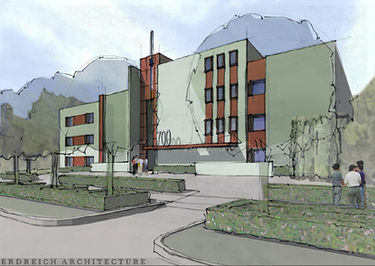 700 Apartments (formerly the Highland Court Apartments and 700 A Condominium) is a 35-unit apartment building located at 700 34th Street South.

The complex, built as apartments in the 1950s, was sold to partners Michael Cooney, Brett Connor, Court Davis and Clint Choate in June 2006 for $1.5 million. They spent $5 million updating and renovating the building as a condominium project, with a swimming pool courtyard, recreation room, dry sauna and a re-styled facade.

The project was designed by Erdreich Architecture and built by Professional Builders with financing from Red Mountain Bank. The upper units have views of the city skyline. The project was completed in June 2008. The condominiums were priced from $149,000 to $339,000 when first put on the market.

In 2016 the property was sold to another local development group headed by David Oakley for $2.2 million. In addition to exterior and interior renovations, Oakley leased the unsold units as apartments, and acquired others that had sold as they became available. In 2019 he sold the complex to an affiliate of Harbert Realty Services for $2.9 million. They sold it, in turn, to an affiliate of KH Management in 2021 for $4.6 million.