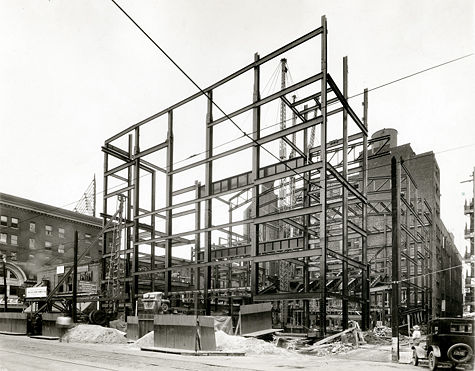 1927 photo by Keily showing construction of the Alabama Theatre.

There was a photographer named Keily in Fort Valley, Georgia, and a "Keily's Art Studio" in Americus at the turn of the century which likely belonged to Keily's father, Alfred Sr. An Alfred C. Keily died in Birmingham on December 2, 1926 according to an obituary in the Americus Times-Record. In 1915 Keily (presumably the senior) advertised his commercial photographs in association with Peddinghaus Studio at 2024 1st Avenue North and claimed to have "20 years in the business". In 1922 he had his own studio in the Producers' Exchange Building at 12½ 21st Street North and advertised 12x20 views and panoramas.

In 1927 Keily (presumably the junior) advertised his specialty in commercial views along with any photographic commissions and Kodak photofinishing from his own studio at 404 20th Street North. In the 1930s, his studio was located at 517 19th Street North.

Keily came to Birmingham from Americus, Georgia sometime after 1920 (though his Birmingham News obituary describes him as a "lifelong resident").

In 1953 Keily served as president of the Professional Photographers of Mississippi-Alabama. His photographs have appeared on numerous postcards. A collection of his prints is held by the Birmingham Public Library Archives.

Keily died on March 25, 2004 in Birmingham at the age of 95. He was interred at Elmwood Cemetery.