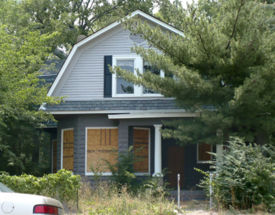 The A. H. Parker residence, completed in December 1907 at 522 5th Street North, was built for noted educator A. H. Parker and was one of the first commissions in Birmingham for African-American architect Wallace Rayfield.

Parker had become acquainted with Rayfield through his association with Tuskegee Institute, where his second wife, Bessie, had been employed. After her death in 1896, Parker left teaching for a while, but was encouraged to return to the profession in 1899. By 1905 he was not only the principal of Industrial High School, Birmingham's first public high school for African Americans, but also the president of the Alabama State Teacher's Association. In 1906 Parker and his friend Edward A. Brown entered into real estate development by buying several vacant lots at Mortimer Street and 7th Avenue North in Smithfield.

It was there that Parker constructed a new house for his family, the mirror image of one built for Brown next door. The main floor was clad in hand-molded concrete blocks which were made on site. The walls are sheltered by a broad eave. The gambrel roof is crossed by a transverse ridge of the same dimensions, and the gables sided with narrow wood clapboards. An oval vent in on the front gable was given a decorative treatment. The porch extends from a bay window on the left side of the house to beyond the right-hand wall and features formed block piers on the corners and turned wood columns on either side of the steps.

Parker resided there until his death in 1939.

Since then the home gradually fell into disrepair. The City of Birmingham purchased the property in 2001 for $32,500 and partnered with the Parker High School United Alumni Association to restore it for use as the group's headquarters. The city spent $92,000 in 2005 for a new roof, doors, floors and windows, which were boarded up while the home remained vacant and fund-raising continued.

The Alumni Association, meanwhile, became discouraged by what they term a "lack of cooperation" from the city and ended their fund-raising campaign. Smithfield community president Emanuel Ford has also worked with the Smithfield Historical Committee to lobby the city for assistance in restoring the house.

With no specific plan on the books, the property was left untended. Radio talk show host Frank Matthews brought photographs of the boarded-up house and overgrown yard to the Birmingham City Council in June 2007. The Council was surprised to learn that the city owned the property. Councilor Roderick Royal stated that the city had a responsibility to maintain its own property and to honor "the historic legacy of Parker High School". Councilor Steven Hoyt suggested working with the Birmingham Civil Rights Institute to establish a museum and meeting facility in the house.

On July 17 the Council passed a resolution asking Mayor Bernard Kincaid to give the Institute custody of the property which would be used as a museum. The city would continue to fund the house's restoration under the proposal suggested by Hoyt. Kincaid said that approximately $59,000 in money previously allocated to the project remains for restoration needs. Councilor William Bell also reported that he is working with a bank foundation to finance further restoration as a "keystone to redevelopment and renovation of the entire area."

The Parker High School United Alumni Association has continued to criticize the city for snubbing the group and for blaming them for Birmingham's own failure to complete the project. Renee Kemp-Rotan, Kincaid's director of capital projects denied the criticisms and said that she was still waiting for the group to produce a long-term plan for the property.