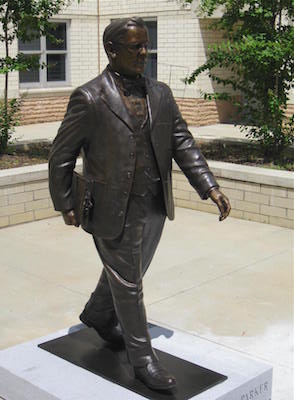 The statue was sculpted by Brian Owens, who was commissioned by the Birmingham Board of Education, for display in the lobby of the renovated school. Ultimately, the statue was moved to a pedestal on the front lawn of the building, instead. It is surrounded by a wrought iron fence to protect it from vandalism. In 2015 new Birmingham City Schools superintendent Kelley Castlin-Gacutan directed that the fence, which gave the appearance of a cage, should be removed.

The statue carries a bronze clipboard that contains an excerpt from a speech given by Arthur H. Parker to the Alabama State Teachers Association in Mobile, Alabama in 1906 shortly after being elected as its President. It reads, "Real teaching is from the soul not from the mouth, and what the teacher is, develops and grows in his pupils. The boys and girls of today must draw in deep and holy inspirations and form noble and lofty ideals. The profession of teaching needs the best product that the race produces. It needs men and women who are morally, mentally and physically strong and sound."