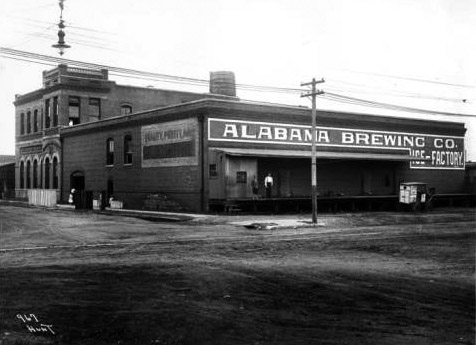 The Alabama Brewing Company was a brewery operated by Isadore Newman, Arthur Isnard and A. Cammack of New Orleans, Louisiana from 1897 until local prohibition was enacted in 1908. J. M. Wilzin was president of the company.

The newly-formed business took over the idled brewery at 22nd Street and Avenue E operated by the Birmingham Brewing Company, which went bankrupt during the financial panic of 1893. The new owners invested $60,000 in repairs and equipment, including new boilers, filters and engines. A new 55'x88' 2-story bottling house was built, complete with a 35-ton ice machine. The head brewmaster, Valentin, oversaw the production of 5,000 barrels in the company's first full year.

In 1899 a well-driller working on an expansion of the plant hit a seam of natural gas, which was tapped for use in the brewery. By 1900 the company had expanded with a cold-storage and ice plant in Gadsden. By 1905 the company was producing 40,000 barrels with over 100 workers on payroll during the busy brewing season. On January 4, 1906 the company acquired additional property on Powell Avenue and engaged the firm of Wheelock, Joy & Wheelock to design a commercial building that could be leased to William Wise to operate a saloon. In April the company agreed to sell that property to investor Charles Whitaker of Davenport, Iowa with the provision that he lease it back to them for five years at $4,000 per year. The contract was amended to an option before it was executed on May 1.

Jefferson County residents voted on October 28, 1907 to enact a local prohibition on alcohol sales. The brewery was given until May 28 to dispose of its stock and ended up pouring 300 barrels into the street that day. The owners continued doing business as an ice manufacturer until 1917.