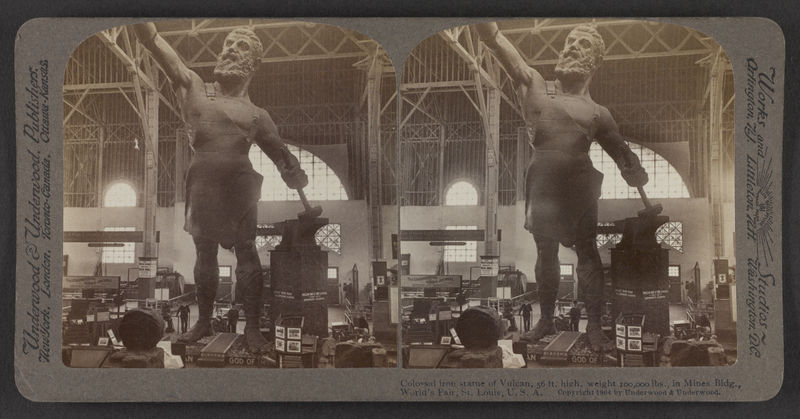 The Alabama Mineral Exhibit was a display of mineral resources and industrial opportunities prepared by the Commercial Club of Birmingham for the Palace of Mines and Metallurgy at the Louisiana Purchase Exposition in St Louis, Missouri in 1904. The central figure was the cast-iron colossus, Vulcan, commissioned by the Club from sculptor Giuseppe Moretti and cast by James McWane at the Birmingham Steel and Iron Company.

Alabama's exhibit received no state funding and was sponsored entirely by the efforts of the Commercial Club, headed by Fred Jackson and James MacKnight. They sought donations from the public and raised $20,000 in subscriptions. MacKnight hired Moretti to prepare the plaster model for Vulcan under an extremely short deadline. He completed the work and accompanied the plaster pieces to Birmingham to oversee their casting in iron in twenty sections. An agent of the Japanese government observed the entire process to file an official report. The resulting 56-foot-tall statue was awarded a prominent place at the Exposition, a 62 foot by 32 foot area centered at the back of the large hall on axis with the primary entranceway, and framed by a huge arched window facing the setting sun. Unlike most displays, Alabama's did not abut any other exhibits and was viewable from walkways all around. The statue itself would be erected just off center, looking up at his spearpoint aimed into the central dome of the hall.

The 130,000 pound casting of Vulcan was shipped to St Louis in pieces in early spring 1904 with the final section arriving on April 22, eight days before the exposition commenced. The base for the statue was prepared by driving nine heavy piles to bedrock. Anchor bars were affixed to Vulcan's legs and through another timber bolted to the piles with steel plates. One of Vulcan's arms had its bolt holes misaligned, and it could not be secured before the opening of the fair. The composition was completed in mid-May and a dedication program was set for June 7.

David Francis, president of the exposition, welcomed the 100 or so visitors from Alabama. Geologist Joseph A. Holmes, organizer of the Mining and Metallurgy exhibit, gave a lecture on "Alabama Iron Fields" and Fred Jackson delivered the principal address. His daughter, Miriam, christened the statue with a bottle of water drawn from the Cahaba River which was provided by Sidney Lee of the Alabama Grocery Company. A band from the Phillipines provided music. The crowd then reconvened at the State of Kentucky building, which had been loaned to them for a reception.

During the fair, both the phrases "Vulcan, god of fire and metals, cast at Birmingham, Alabama" and "Iron is king, its home, Birmingham, Ala." were painted in gold paint on his anvil. Despite the inscriptions some visitors to the fair mistook Vulcan for a portrait of Andrew Carnegie or a generic village blacksmith. Those of a more Biblical bent thought it must be a statue of Tubalcain, described in Genesis 4:22 as "an instructer of every artificer in brass and iron." The Commercial Club helpfully provided a handout pamphlet which reprinted a lecture that John Phillips gave to students at Birmingham High School on "Vulcan—The Mythological God". A dedicatory plaque included these lines, penned by John Henry Adams:

Just as my statue towers above the sons of earth, so shall the district, from whose breast the ore and coal were torn and fused to give me birth, exceed all others in "Times March". For o'er and o'er nature hath flung her treasures with a generous hand, and Birmingham sits enthroned. Both hemispheres can draw on her; the mineral wealth of every land is there allied to rule the world in future years.

At Vulcan's feet were placed large piles of the range of principal raw materials used to make steel which could be mined in the Birmingham District, including brown, soft red and hard red iron ores, limestones and bituminous coals. Other piles of material included dolomite, gray iron, pig iron, clay, kaolin, cement, gold ore, copper ore, lignite, coke, glass sand and a long list of undeveloped minerals. Also displayed were numerous materials and goods fabricated from Birmingham-made iron and steel such as steel rails, bar and angle iron, car wheels, bar steel, steel plate, sewer pipe and vitrified brick. One additional display, a "Head of Christ" and a bust of Chief Talladega, both sculpted by Moretti from Sylacauga marble, demonstrated the high-quality stone obtainable in Alabama for artwork, decoration and building. As part of the display, an "electric picture machine" designed and built by George R. Hilty of the Pioneer Mining & Manufacturing Company, was installed at the fair, presenting "200 view of Birmingham in continuous movement" to illustrate the scenery and life of the Birmingham District. James MacKnight kept an office at the fair during its run and, since the State of Alabama had not sent a commission, he and his assistants were granted the privileges of an official state commission.

Vulcan was easily the most striking exhibit in its hall, and was awarded the "Grand Prize" of the fair. James MacKnight, James McWane and Moretti were awarded silver medals for their roles in its creation. Moretti also won another silver medal for his marble sculptures. The entire exhibit elicited a great deal of comment and optimism about the industrial prospects of the District. The Louisiana Purchase Exposition Commission summarized the feelings of observers that Alabama was destined to move to the forefront not only of iron and steel production, but also the manufacture of glass, pottery, fuels and other mineral-based products.

Afterwards, several other cities offered to purchase the statue, and Portland, Oregon secured a commitment from the Commercial Club to display it at the Lewis & Clark Exposition in 1905. A 40-foot pedestal was erected at the fairgrounds there, but unpaid debts and damage to the statue made it impossible for the club to make good on the loan.

Through the generosity of the Louisville & Nashville Railroad Vulcan was returned, in pieces, to Birmingham, with damage to his right arm and missing his spear point. Disagreements about the most suitable site for its display and a lack of funds to move forward with any of those suggestions left L & N no choice but to discard the statue on the rail siding and reclaim their cars. There it remained until J. A. Emery and Culpepper Exum forged the deal that brought him to the Alabama State Fairgrounds in time for the 1906 Alabama State Fair.

View of the Palace of Mines and Metallurgy 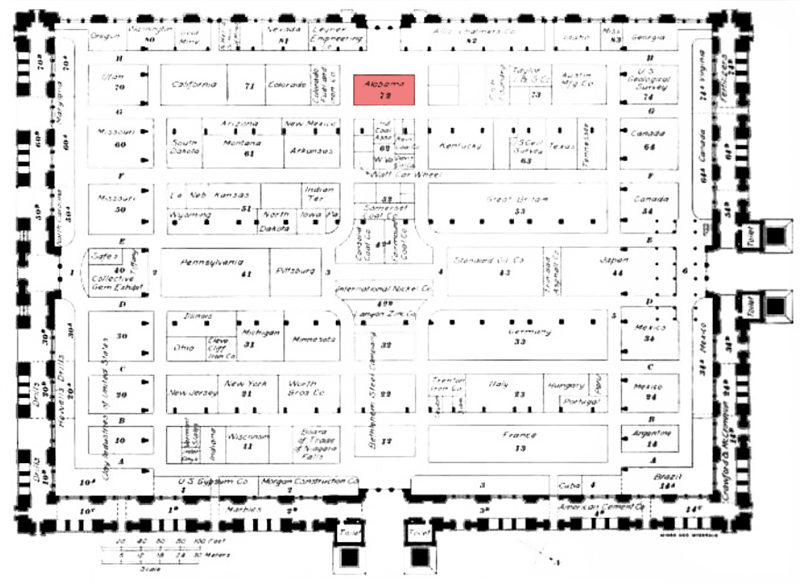