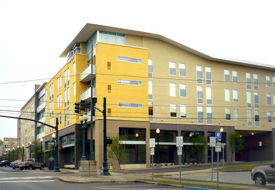 The Aloft Birmingham SoHo Square is a 111-room, 5-story hotel located at 1903 29th Avenue South in Homewood. The $20 million project was developed on the site of the former Homewood City Hall, which was sold in 2007 during the construction of a new city hall at SoHo Square nearby. It opened on April 2, 2009. Richard Davis is general manager.

"Aloft" is a concept franchised by Starwood Hotels and Resorts of White Plains, New York through its "W Hotels" division. The Homewood hotel is operated by Winston Hospitality of Raleigh, North Carolina. Developers Scott Bryant and Milton "Bubba" Smith described the hotel concept as "anti-normal" with features aimed at young professionals such as iPod and laptop docking stations, 42-inch LCD televisions, and walk-in spa tubs. Other amenities include a swimming pool, an all-hours pantry, the w xyz bar, and a full-service restaurant.

Michael's steak house opened a restaurant in the hotel in June 2009. Jinsei had previously announced its participation in the project, but backed out after unsuccessful negotiations, eventually opening across the street.

The hotel was sold to Palm Beach, Florida-based Island Hospitality in 2015 for $16.33 million. An affiliate of Kohlberg Kravis Roberts & Co. of New York City purchased the property from them in September 2021 for $16.17 million.