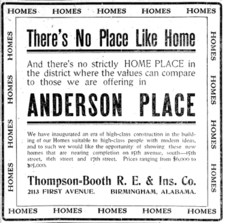 Anderson Place is a residential subdivision developed by Thompson-Booth Real Estate & Insurance Company in the early 1900s. The subdivision encompassed forty acres on the northern slope of Red Mountain which was purchased by J. Cary Thompson from Frank Y. Anderson, former land commissioner for the Alabama Great Southern Railroad. The subdivision, named for Anderson, was platted with wide streets by 1905 and included 15th and 16th Avenue South from 15th to 18th Street South, between Phelan Park and Valley View Park.

Though the district was considered "remote", Thompson succeeded in getting a streetcar line to run down 15th Street in 1907. Improved access helped him sell numerous lots. He also completed houses on speculation for sale at prices ranging from $5,000 to $15,000. He constructed his own house in the subdivision at 1631 15th Avenue South before 1910. By that point it was considered one of the finest residential neighborhoods in the city. Most of the lots were occupied with large Crafstman and Bungalow-style houses before 1912. As of 1981 the district remained largely intact except for three newer apartment buildings which failed to respect the setbacks of the older houses.

The Anderson Place Historic District was added to the National Register of Historic Places on August 28, 1986 and expanded on June 15, 1991.