From Bhamwiki
(Redirected from Andre Natta)
Jump to: navigation, search 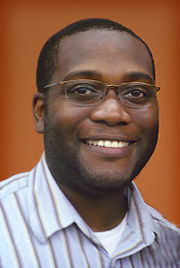 André Claude Natta (born August 29, 1975 in East Orange, New Jersey) is publisher and managing editor of The Terminal and vice-president of community development for the Birmingham Jaycees.

Though he was born in East Orange, Natta grew up in the University Heights section of the Bronx, the older son of two Trinidadian-immigrant nurses. He attended St Nicholas of Tolentine Elementary and Mt St Michael Academy in New York and took art classes at the Cooper Union and at St John's University. He also participated in the Lwanga Scholars program for African- and Latin-American students sponsored by the Archdiocese of New York.

He earned his Bachelor of Fine Arts in architectural history (with a minor in architecture) from the Savannah College of Art and Design in Georgia. He played one season of baseball in college, setting a Bees record for on-base percentage with one hit and two runs scored in two at bats. He is still an avid runner.

After 11 years in Savannah, which included stints as a freelance reporter and manager of a bed & breakfast. Natta applied for an opening with Main Street Birmingham (MSB), a city-created nonprofit that aims to revitalize historic commercial districts outside the city center. He moved to Birmingham in September 2004, serving as MSB's senior coordinator until March 2007. He originally lived in a loft in the Goodall-Brown Building and currently resides in the city's Norwood neighborhood.

In April 2007, Natta started The Terminal, a "hyperlocal" web publication for the Birmingham metropolitan area. He serves as publisher and managing editor. He was also the vice president of the board of directors for the Ruffner Mountain Nature Preserve, a former member of Catalyst for Birmingham's board of directors and serves on the Jefferson County Historical Commission.

Beginning in 2011, Natta helped to facilitate "#wjchat" conversations about journalism on Twitter. He began working as a columnist for Poynter and as a digital media producer for WBHM-FM in early 2016.

In 2017 Natta was selected for a John S. Knight Journalism Fellowship at Stanford University.