Difference between revisions of "Anthony Grant" 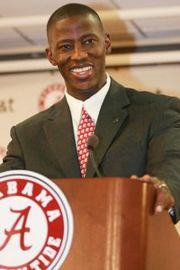 In six seasons at Alabama, Grant's teams went a combined 116-83 with a 53-47 conference record and one NCAA tournament appearance. A losing record in 2013-14 placed him under increasing pressure. When the Crimson Tide finished the 2014-15 season with a 7-9 conference record and no NCAA bid, athletics director Bill Battle made the decision to release him.