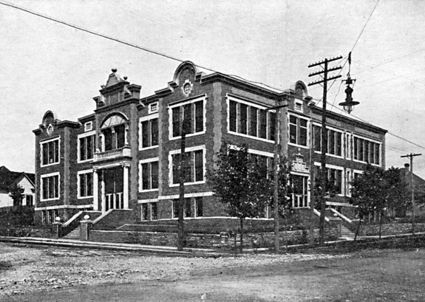 The Arlington School was the first high school for the city of Bessemer. The 3-story brick and limestone Classical revival-style was constructed on Arlington Avenue in 1908. It was later converted into an elementary school before it closed in 1986. The vacant building was victimized by vandals and demolished in 2014.

It held eight 700-square-foot classrooms with 13-foot ceilings, for a total capacity of 360 pupils. Each room was arranged so that light from the large windows passed over the student's left shoulders during the day. Toilets were located in basement along with a gymnasium and mechanical plant. Flanking the main entrance were offices for the Bessemer Board of Education and the Superintendent of Schools. The second story held a chemistry laboratory and library. The 50-foot by 70-foot auditorium with its horseshoe balcony could seat 624.

Bessemer City Schools closed Arlington School in 1986. The vacant building was listed as one of the Alabama Historical Commission's "Places in Peril" for 2003. Since then, various groups have proposed an adaptive re-use for the structure, including the Rainbow Community Development Corporation which was working with Sloss Real Estate to attempt to redevelop the building in 2004. That plan never came to fruition and Sloss returned its conditional title to the board. More recently B3 (Bring Bessemer Back) has submitted a $1.8 million redevelopment plan to the board which would convert the school into offices for non-profit groups and re-use the auditorium for community functions.

On January 15, 2008 the Bessemer School Board declared the school building to be "surplus", opening the door for it to be sold. In August 2008 inspectors for the City of Bessemer deemed the structure unsafe, meaning that the board must bring it up to current code before it can be sold or reused. In October 2012 the Board began asking for bids to demolish the building.

In Fall 2013 the property was purchased by demolition contractor Ezra Hopson. He salvaged parts of the building for sale and began demolishing the structure in the Summer of 2014.