Difference between revisions of "Avondale Park"

This article is about the Birmingham city park. For the radio program, see Avondale Park (radio program). 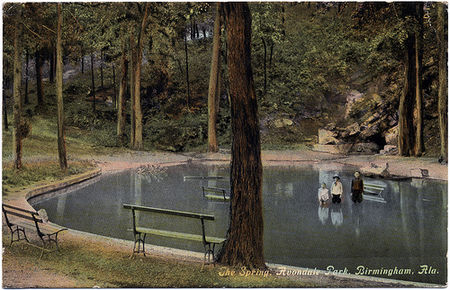 Avondale Park is a 40-acre wooded park on the slopes of Red Mountain, with its entrance at the south end of 41st Street South as it meets 5th Avenue South. It overlooks, and is named for, the City of Avondale, which was annexed into Birmingham in 1910.

Originally the park area was an informal resting spot among natural springs along the Georgia Road. The "Big Springs" appeared on maps of the area before the Civil War. The property was part of a large grant of land given to two-time Jefferson County Sheriff Abner Killough in 1858 and was the site of a minor skirmish that left his wife wounded. He sold the property to Peyton King, who built a house next to the spring. King, in turn, sold his holdings to the Avondale Land Company in 1887.

Whether by agreement with King at the time it was purchased, sentiment for preserving open green spaces, or the mere fact that the steep hillside and spring-fed basin would be less than ideal for building, the expansive 40 acre park gave Avondale a true recreation spot. Since 1885 a mule-powered streetcar had been bringing people from Birmingham to the springs to bathe and picnic. The streetcar line was upgraded to electrical power and the resort became among the most popular day trip destinations in the region. Upon Avondale's annexation into Birmingham in 1910, it became the city's largest park.

1887 advertisement for an Avondale Park merchant

As it was first developed, rock retaining walls were constructed to enclose wading pools fed by the springs, which were encircled by an iron fence and covered by a wooden shelter. Paved walks wound between the pools and benches and picnic tables were provided, later supplemented by a covered gazebo. Avondale Cave, accessed from above the spring, attracted adventurers into its depths. Enterprising quarrymen also searched the caves to remove slabs of marble, processed at the nearby Avondale Marble Factory. The spring outlet and cave entrances were sealed off in the 1930s.

Many landscape improvements, including a nationally-renowned rose garden, were pursued by Mayor George Ward. Over time athletic fields and gravel walkways were added. In 1911 cages were erected for a small menagerie of animals that would later grow to constitute Birmingham's first public zoo. The star attraction was "Miss Fancy", an erstwhile circus elephant purchased by the city. Other animals on exhibit included a bison, two cows, Dick the rattlesnake, a llama, two bears, an assortment of foxes, wolves, coyotes, raccoons and wildcats, along with monkeys, rabbits and water fowl. The zoo was shuttered in 1934 as too expensive to maintain. 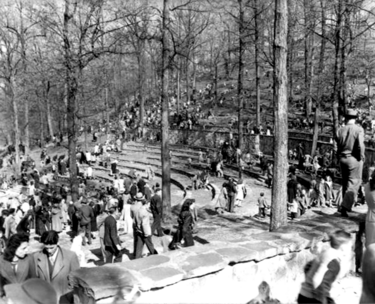 A large wooden grandstand was constructed at the park's northeast corner for the spectacular pageant in celebration of Birmingham's 50th Anniversary in 1921. That same year the Birmingham City Commission sponsored the construction and operation of a Model Poultry Farm with room for 350 birds.

Several improvements were made to Avondale Park with funds from a municipal bond issue in 1931. A picturesque pavilion, known as the Avondale Villa and designed by Burnham & Greer, was constructed on the hill at the rear of the park. A new stone amphitheater, designed by landscape architect Rubee Pearse was constructed just south of the lagoon. The rose garden's central gazebo was replaced with a larger octagonal shelter, and another picnic pavilion was built on the western side of the park. In 1936 the Birmingham Civic Symphonic Orchestra began playing Sunday afternoon free concerts at the park as a public service.

Along with other Birmingham parks, Avondale Park was closed by order of the Birmingham City Commission in defiance of court-ordered racial integration in 1963. After it reopened, the tradition of free Sunday concerts resumed, with local bands playing folk and rock for crowds of young people, especially those leaning toward counter-cultural ideals and expressions. Neighbors' complaints about drug use and other activities occasionally brought the Birmingham Police Department to clear the park.

Promoters began brought touring bands to Avondale Park, including The Mystics with Lionel Richie, Plymouth Rock, and a landmark sellout show by the Allman Brothers in 1969. The concerts continued through the mid 1970s. The happenings at the park attracted other services to the area. A free health clinic treated drug overdoses and Jack Douglas launched "His House", a Christian ministry and commune nearby.

In the late 1970s, Avondale Park was considered as the site of a handicapped-accessible playground to be jointly developed by the Parks & Recreation Board and UAB. In the end another site was chosen.

The restored Avondale Villa on the south edge of the park 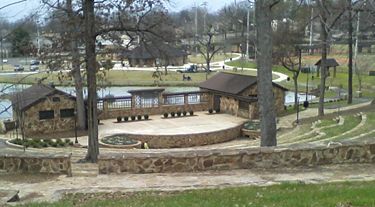 A Friends of Avondale Park group was formed in 1989 which succeeded in preparing a master plan for renovations to the park and restored the Villa in 2006.

In 2008 the "Compound Folk Festival" moved from Hoover to Avondale Park for its third year and changed its name to the Birmingham Folk Festival.

In July 2009 Main Street Birmingham and the Avondale Business Association announced $3 million in city funding to advance the Friends' master plan, including renovations to the amphitheater, playground, athletic fields and restroom facilities. 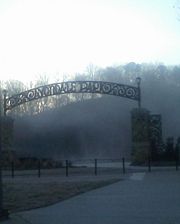 The renovated sign at the entrance to the park

Renovations to the park began February 28, 2011, with KPS Group as the project's architect and Stone Building Co. as the contractor. The park officially reopened November 19, 2011. The park, with the exception of Avondale Villa, was closed during that time. The $2.88 million plan, funded by City of Birmingham bond money, includes 3 new baseball fields, renovations to the amphitheater, its dressing room, the existing picnic pavilion and the existing pond, creation of a spring-fed grotto and creek using an existing spring, a new concession and restroom building, new playgrounds, making all walkways up to ADA standards, building a new entryway at 41st Street, expanding the parking area, and building an additional picnic pavilion.

In 2013 the Forest Park South Avondale Business Association sponsored the installation of free wi-fi internet service throughout the park and Avondale Library.