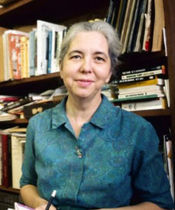 Bettie Crutcher (born September 24, 1938 - died November 23, 1994) was a registered pediatric nurse and the wife of bookstore owner Gene Crutcher. She met Crutcher while a student at Peabody College in Nashville, Tennessee and came with him to Birmingham in 1954.

In addition to nursing, Bettie worked at the bookstore as a bookkeeper. She and Gene had six children, Annie, Beth, Kay, Bill, David, and Sara.

In the 1970s she was diagnosed with polycistic kidney disease. A benefit concert was staged at Bell Auditorium in 1973 to help pay for her dialysis treatment, which she continued until her death.