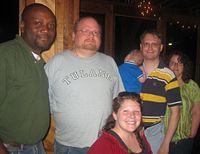 BTW, with the completion of 1949, users can now seamlessly visit each decade from today to the 1790s (or vice versa) using the decade boxes at the bottom of each year. There's still several years missing in the 20th century, but we're getting there. --Lkseitz 07:00, 1 November 2012 (PDT)

Can I just go ahead and say that editing the wiki with Safari and the default keyboard on an iPad really, really, really sucks. I miss my real keyboard with {, [, and other non-alpha characters that are readily accessible! I apologize in advance for any articles I post on weekends that don't have the proper format, categories, etc. If any of you have any suggestions, or know of any aps that will make my life easier, please feel free to let me know. --Wheresdib 08:19, 26 November 2012 (PST)

I've discovered some old Birmingham telephone books in the collections of the Internet Archive. So far I've only found 1920 and 1945. I did a cursory search, but that's all the luck I've had. If anyone has a little time to dig into deeper, please feel free (and share your results). --Lkseitz 10:36, 24 January 2013 (PST)

Our 7th Anniversary is coming up, and I've been irresponsible about scheduling a meet-up. If you guys want to get together on Friday 15 or Saturday 16, I can make it, but I can't help plan it because I'll be away from email and such for the two weeks between now and then. I promise to check back and see if there's somewhere I need to be. If not, I'll get back with you and put something together for a later weekend. --Dystopos 20:29, 1 March 2013 (PST)