Difference between revisions of "Birmingham" 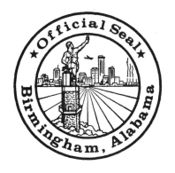 Birmingham is the largest city in Alabama and the seat of Jefferson County (though portions of the city extend into Shelby County). The city was founded in 1871, after the Civil War, as an industrial enterprise. It was named after Birmingham, the major industrial city of England.

Through the middle of the 20th century, Birmingham was the primary industrial center of the Southern United States. The astonishing pace of Birmingham's growth through the turn of the century, earned it the nicknames "The Magic City" and "The Pittsburgh of the South". Birmingham's major industries centered around iron and steel production. Over the course of the 20th century, while industry declined nationwide, the city's economy diversified. Though manufacturing is still a strong sector, Birmingham has also become a major medical research center and a regional banking and publishing power.

Home to a significant but rigorously segregated African American middle class, Birmingham was one of the battlegrounds of the Civil rights movement throughout the 1960s. Race relations remain a central issue in Birmingham.

The population of the city proper is 242,820 (2000 U.S. census), and has been estimated to have declined to 231,483 by July 1, 2005. Birmingham serves as the primary nucleus for a sprawling urbanization known as the Birmingham-Hoover Metropolitan Statistical Area with 1.09 million inhabitants. In recent years Birmingham has been named by various groups as one of the best U.S. cities in which to live.[1]

Birmingham was founded on June 1, 1871 by real estate promoters who sold lots near the planned crossing of the Alabama & Chattanooga and South & North Railroads. The site of the railroad crossing was notable for the nearby deposits of iron ore, coal, and limestone - the three principal raw materials used in making steel. Birmingham is one of the very few places worldwide where significant amounts of all three minerals can be found in close proximity. From the start the new city was planned as a great center of industry. The founders borrowed the name of Birmingham — England's principal industrial city — to advertise that point. The new enterprise got off to a slow start. Growth of the city was impeded by an outbreak of cholera and a Wall Street crash in 1873. But soon afterward the city began growing rapidly.

In the 1950s and '60s Birmingham received national and international attention as a center of the Civil rights movement. A watershed in that movement occurred in 1963 when Martin Luther King Jr, imprisoned for having taken part in a nonviolent protest, wrote the now famous Letter from Birmingham Jail, a defining treatise in his cause against segregation. Birmingham is more remembered, however, for a bombing which occurred later that year. Four black girls were killed by a bomb planted at the 16th Street Baptist Church.

Following the same pattern as many other American cities, the population inside Birmingham's city limits has fallen over the past few decades. From 340,887 in 1960, the population was down to 242,820 in 2000, a loss of about 29 percent. However, the growth of Birmingham's suburbs over that same period has kept the metropolitan population growing.

In 1971 Birmingham celebrated its centennial with a round of public works improvements, including the upgrading of Vulcan Park.

Over the course of the 20th century, while industry declined nationwide, the city's economy successfully diversified. Though manufacturing is still a strong sector, Birmingham also is a major medical research center and a regional banking and publishing power.

Birmingham occupies Jones Valley, flanked by long parallel mountain ridges (the tailing ends of the Appalachian foothills) running from north-east to south-west. The valley is drained by small creeks (Village Creek, Valley Creek) which flow into the Black Warrior River. More importantly, the valley was bisected by the principal railroad corridor, along which most of the early manufacturing operations began.

Red Mountain lies immediately south of downtown. Birmingham's television and radio broadcast towers are lined up along this prominent ridge. The "Over the Mountain" area, including Shades Valley, Shades Mountain and beyond, was largely shielded from the industrial smoke and rough streets of the industrial city. This is the setting for Birmingham's more affluent suburbs of Mountain Brook, Homewood, Vestavia Hills, and Hoover. South of Shades Valley is the Cahaba River basin.

Sand Mountain, a smaller ridge, flanks the city to the north and divides Jones Valley from much more rugged land to the north. The Louisville and Nashville Railroad (now CSX Transportation) enters the valley through Boyles Gap, a prominent gap in the long low ridge.

Ruffner Mountain, located due east of the heart of the city, is home to Ruffner Mountain Nature Center, one of the largest urban nature reserves in the United States.

Birmingham has a temperate climate characterized by warm summers, mild winters, and abundant rainfall. Birmingham has slightly less rainfall than the Gulf Coast and is slightly cooler. January sees average daily high temperatures of 53.0 °F (11.7 °C) and lows of 31.8 °F (−0.1 °C). In July the average daily high is 90.6 °F (32.6 °C) and the low is 69.2 °F (20.7 °C). The average annual temperature in Birmingham is 62 °F (17 °C). Snowfall is infrequent in the area, with a yearly average of only 0.5 inches (1 cm). The average yearly rainfall in Birmingham is about 52 inches (1330 mm), with March being the wettest month and October the driest.

The spring and fall months are pleasant but variable, but cold fronts frequently bring strong to severe thunderstorms and occasional tornadoes to the South. The fall season features less rainfall and fewer storms, as well as lower humidity than the spring, but it is also a secondary severe weather season. Birmingham is located on the heart of a tornado alley known as the Dixie Alley due to the frequency of tornadoes in Central Alabama. In late summer and fall months, Birmingham experiences occasional tropical storms and hurricanes due to its proximity to the Central Gulf Coast.

Birmingham has a strong-mayor variant mayor-council form of government, lead by a mayor and a nine-member city council. The current system replaced the previous city commission government in 1962 (primarily as a way to remove Commissioner of Public Safety Eugene "Bull" Connor from power).

By Alabama law, an issue before a city council must be approved by a two-thirds majority vote (Act No. 452, Ala. Acts 1955, as supplemented by Act No. 294, Ala. Acts 1965.). Executive powers are held entirely by the mayor's office. The current mayor of Birmingham is Bernard Kincaid, who was voted into office in 1999.

In the 1970s and 1980s, Birmingham's economy was transformed with investments in bio-technology and medical research at the University of Alabama at Birmingham (UAB) and its adjacent hospital. The UAB Hospital is the only Level I trauma center in the entire 4-state area providing healthcare and breakthrough medical research. UAB is now the area's largest employer and the largest in Alabama with a workforce of about 20,000. Birmingham is also a leading banking center, serving as home to three major banking companies: AmSouth Bancorporation, Compass Bancshares and Regions Bank. SouthTrust, which also had been headquartered in Birmingham, was acquired by Wachovia in 2004. Telecommunications provider BellSouth has a major presence with several large offices in the metropolitan area. The city is also a powerhouse of construction and engineering companies. It started with Rust Engineering International and has grown to many other construction and engineering companies such as BE&K, Brasfield & Gorrie, BL Harbert International, and Dunn Construction, all of which are in the top engineering and construction companies in the world.

Before the first structure was built in Birmingham, the plan of the city was laid out over a total of 1,160 acres (4.7 km²) by the directors of the Elyton Land Co. The streets were numbered from west to east, leaving Twentieth Street to form the central spine of downtown, anchored on the north by Capital Park and stretching into the slopes of Red Mountain to the south. A "railroad reservation" was granted through the center of the city, running east to west and zoned solely for industrial uses. As the city grew, bridges and underpasses separated the streets from the railroad bed, lending this central reservation some of the impact of a river (without the pleasant associations of a waterfront). From the start, Birmingham's streets and avenues were unusually wide at 80 to 100 feet (24 to 30 m), purportedly to help evacuate unhealthy smoke.

In the early 20th century professional planners helped lay out many of the new industrial settlements and company towns in the Birmingham District, including Corey (now Fairfield) which was developed for the Tennessee Coal, Iron and Railroad Company (subsequently purchased by U. S. Steel).

The Robert Jemison company developed many residential neighborhoods to the south and west of Birmingham which are still renowned for their aesthetic quality.

Birmingham officials in November 2004 were reviewing a City Center Master Plan developed by Urban Design Associates of Pittsburgh, which advocates strongly for more residential development in the downtown area and includes a major park over several blocks of the central railroad reservation.

Birmingham is served by Birmingham International Airport (there is another airport of the same name in Birmingham, England).

The water services for Birmingham and the intermediate urbanized area is served by the Birmingham Water Works, a public authority that was established in 1951, the BWWB serves all of Jefferson, northern Shelby, western St. Clair counties. Its reservior for BWWB is Lake Purdy, but it has several other reserviors including Bayview Lake in western Jefferson County. There are plans to pipeline water from Inland Lake in Blount County and Lake Logan Martin, but those plans are on hold indefinitely. Jefferson County Environmental Services serves the Birmingham metro area with sanitary sewer service.

Electric power is provided primarily by Southern Company-subsidiary Alabama Power. However, some of the surrounding area such as Bessemer and Cullman are served by the TVA. Natural gas is provided by Alagasco. The local telecommunications are provided predominantly by BellSouth.