This article refers to the club founded in 1889, for clubs with similar names, see Birmingham Athletic Club (disambiguation). 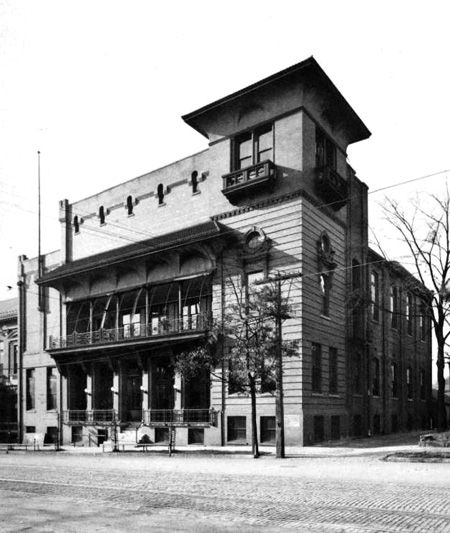 Birmingham Athletic Club was a private club located at 502 20th Street North. It was founded in 1886 by a group headed by Irish-born rugby devotee Joseph Ross. Other charter members included Albert Morton, J. D. Kirkpatrick, Henry Underwood, Victor Martin and A. M. Chum. The group officially incorporated on July 16, 1889, "for the encouragement of manly sports and promotion of physical culture."

The club's first headquarters was a group of rented rooms above a store on Powell Avenue at 20th Street. They soon moved to the Potter Building on 1st Avenue North, and then into a former Methodist church in 1892. That year the club fielded a football team which challenged the newly-formed University of Alabama team to a match played on November 12 at Lakeview Park. Alabama managed to score one 4-point touchdown, but BAC founder Joseph Ross kicked a 5-point field goal from 65 yards out for the win.

Membership rolls declined during the 1893 financial crisis. Solon Jacobs took over as president in 1894 and helped to rebuild the organization. They relocated to 2104 1st Avenue North in 1895 and constructed tennis courts behind the building on Morris Avenue. By 1904 membership had increased from less than 100 to more than 650.

The club erected a three story brick-clad building with a full basement on a prominent site on 20th Street North in July 1903 at a cost of $57,000. The basement floor housed a rifle range, pressing club, bowling alleys and boilers. The first floor housed offices, lounges, pool and billiards, a library and barber shop. The director's office was on the second floor along with a gymnasium, hand-ball courts, boxing and wrestling rooms and a spectator's gallery.

The club fielded its own entrants in numerous competitive events, including a football team. The club hosted an annual May Day track competition and also hosted a national wrestling championship in 1920.

In 1925 the club built a 10-story building at the northeast corner of 3rd Avenue North and 23rd Street, which contained the club facilities and residential apartments. It sold its former facility on 20th Street to the Robert E. Lee Klan for $190,000. The Klan decided not to proceed with plans to renovate the building and sold it to the Birmingham YMCA for a $10,000 profit in 1926.

The apartments were later operated as hotel rooms. In 1939 the club sold the building, but continued to lease space. It was sold again in 1940 and operated as the Dixie-Carlton Hotel. In 1948 the Birmingham YWCA purchased the building as its headquarters. The building was demolished in 1955 and the site was leased as a surface parking lot.

The Regions Center building, constructed as the First National-Southern Natural Building in 1972, sits on the site of the former Birmingham Athletic Club and its neighbor, the Southern Club.

A new Birmingham Athletic Club was opened in the John A. Hand Building in 1999.