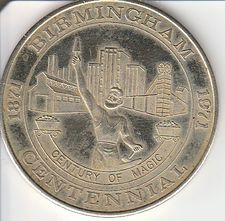 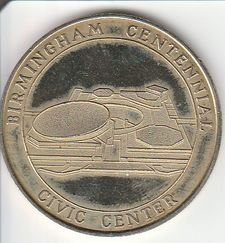 The Birmingham Centennial Coin is a commemorative coin issued around the 1971 Centennial of Birmingham celebration. The most common variant features the city's Centennial Seal on the front, while on the reverse is a drawing of the then-new Birmingham-Jefferson Convention Complex surrounded by the words "Birmingham Centennial" and "Civic Center". At least one other variant is known to exist, with the same front, but a different reverse, this time featuring Vulcan on his remodled pedestal, featuring the enclosed observation deck and new tower cladding, surrounded by the legend "Vulcan Dedication" and "April 8, 1972" separated by two small circles.