Rendering of a Birmingham On-Demand van 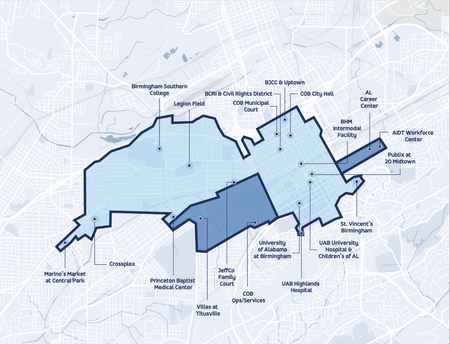 Birmingham On-Demand, also called Birmingham Direct, is a microtransit service funded by the Community Foundation of Greater Birmingham and the City of Birmingham for a trial period from December 2019 to May 2020. Using an app or toll-free number, riders can request a pick-up and drop-off during regular operating hours and within the program's 6.7 square-mile service area for a flat $1.50 fare.

The service is operated by Via Transportation, Inc. of New York City, through its Chicago-based River North Transit subsidiary. Independently-contracted drivers can set their own schedules, but are paid by the hour. The service uses four marked 6-passenger Mercedes Metris vans, some of which are equipped for persons with disabilities.

A 6-month trial of the service was approved by the Birmingham City Council in September 2019 and began operating on December 3. The Community Foundation provided $502,000 in initial funding, and the City approved $250,000 for the pilot program.

Service hours are Monday through Friday from 6 AM to 8 PM and Saturday from 10 AM to 8 PM. The service area stretches from downtown Birmingham, across Southside and Smithfield, to Graymont, College Hills, Birmingham-Southern College and Bush Hills, Rising-West Princeton, East Thomas, Fairview and the Birmingham CrossPlex and Marino's Market in Central Park.

Rather than picking up riders at specific addresses, vans are directed to nearby street intersections. The anticipated wait time for a requested pick-up is in the 10-15 minute range. Additional passengers booked for the same route pay half-price. $14 weekly and $54 monthly passes are also offered. Cash is not accepted. Payments are made through the app or by PayPal, prepaid card or credit card.

If successful, the projected annual cost to expand the program city-wide is projected to be $5 million.