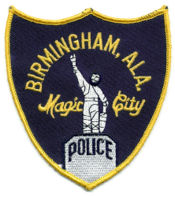 After being re-elected, Connor resumed his belligerence and reinforced the department's reputation for protecting violent segregationists while oppressing Black citizens. He is known to have arranged for police to give 15 minutes of free rein to a mob of vigilantes who awaited arrival of the Freedom Rides buses into Birmingham on Mothers' Day 1961. He met another bus two days later and escorted the demonstrators personally to the Tennessee state line. He also oversaw the purchase and use of two armored "riot cars" which the department employed to intimidate residents.

The department swore in its first African-American officer, Leroy Stover, in 1966. Entering the 1970s, though, as white flight changed the city's demographics from majority white to majority Black, the Birmingham Police Department remained almost entirely white. A pattern of police brutality was taken up as a signature issue for Birmingham City Council hopeful Richard Arrington. The police shooting of Bonita Carter shortly before the 1979 mayoral election drove a wedge between incumbent David Vann, who supported the officer, and Arrington. The issue helped propel Arrington into office as the city's first Black mayor.

In his 2008 State of the City address Mayor Larry Langford pledged to put 50 additional officers on the streets. He supported pay raises for officers and sought City Council approval for technology purchases; specifically for 3-wheel personal vehicles and for surveillance cameras in high-crime areas.

Policing became a primary issue across the United States as the list of Black people killed in custody continued to grow and video, shot by bystanders or captured on officers' body-worn cameras, showed clearly that police accounts of their use of force were often deceitful. Nationwide protests following the death of Trayvon Martin in Sanford, Florida; Eric Garner in Staten Island, New York; and Michael Brown in Ferguson, Missouri fueled the growth of the Black Lives Matter movement. The death of George Floyd in Minneapolis, Minnesota in May 2020 set off a major wave of protests during which emerged a goal of "defunding" police, or moving public resources away from armed responses to crime, and toward social and economic crime reduction programs. In Birmingham Mayor Randall Woodfin and Chief Patrick Smith promised to review department policies, specifically with regard to Campaign Zero's "#8CANTWAIT" recommendations for reducing direct harm caused by police. On July 14 Woodfin immediately adopted a ban on chokeholds and a requirement that other officers intervene and report incidents of excessive violence. Other policy changes were recommended for further evaluation by a Birmingham Public Safety Task Force which was created for the purpose. Their recommendations, published in December 2020, included creating a Citizens' Review Board, expanding the role of social workers in domestic violence calls, making police procedures more transparent, and holding quarterly roundtables with advocacy groups.

In March 2022 Department personnel staged an apparent "sick out" in protest of staffing shortages, too-modest pay raises, and diminishment of pension benefits.

In 2022 the department declined to publicize the number of officers on duty, but a statement by the Birmingham Fraternal Order of Police suggested that the department was understaffed by 114 patrol officers, 15 sergeants, 5 lieutenants and 3 captains from what it considered to be the minimum force.

The department is divided into three major bureaus, each headed by a deputy chief.

The Technology & Research Unit supports the department with evaluation and implementation of improved policing methods and technologies. It serves as a liaison to the Alabama Criminal Justice Information System and the Metro Area Crime Center. In 2021 it began operating the department's own Birmingham Police Real Time Crime Center.

In 2018 the robbery and homicide units were combined into a "Robbery/Homicide Division", later renamed the "Crimes against Persons Division", which consists of the Homicide Unit, Felony Assault Unit, Robbery Unit, Crime Reduction Team (CRT), Project ICE, Intelligence Unit, and the Sex Offender Unit. Scott Thurmond was the first commander of that division.

The Special Response Team Canine (SRT K9) unit has 13 teams of trained police dogs and handlers. The dogs are trained at the Alabama Canine Law Enforcement Officer's Training Center in Tuscaloosa County. The unit is supervised by Sergeant Heath Boackle. The Birmingham Police Mounted Patrol was part of the tactical division before it was disbanded in 2020.