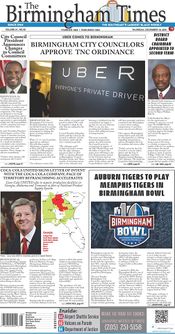 Front page of the December 10, 2015 edition of the Birmingham Times

The Birmingham Times is a weekly newspaper published in Birmingham by the Birmingham Times Media Group, a for-profit subsidiary of the Foundation for Progress in Journalism. Its offices, shared with the Lewis Group marketing firm, are located at 115 3rd Avenue West.

The newspaper was founded in 1964 by marketing executive Jesse Lewis to serve the city's African American community. The current publisher is Samuel Martin, and Barnett Wright is executive editor.

The paper, boosted by an advertising commitment from Bruno's supermarkets, was a commercial success. It was criticized by some for its conservative editorial stance. Lewis endorsed George Wallace and both Presidents Bush. Further controversy came in 2005 when reporter Audrey Lewis was found to have been paid $11,000 for a series of articles supporting Richard Scrushy during his criminal trial on federal charges relating to accounting irregularities at HealthSouth.

Lewis sold the paper to his older son, James in 1994. After Lewis died in 2013, ownership returned to his father. That same year the Alabama Power Foundation helped to launch the Foundation for Progress in Journalism in Jesse Lewis' honor. The paper was sold to the foundation in early 2016.