Difference between revisions of "Blount County" 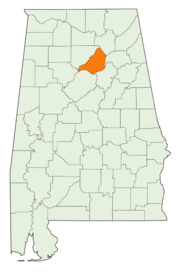 Blount County is a county in the Birmingham metropolitan area. The county was created February 7, 1818 by the legislature of Alabama Territory. Its name honors Tennessee governor Willie G. Blount, who sent Tennessee militia to invade the Creek Nation.

There are three covered bridges extant in the county, the Horton Mill Bridge, Easley Bridge and Swann Bridge, more than any other county in Alabama. Blount County is a "dry" county where the sale of alcohol is prohibited. 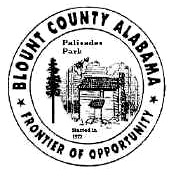 Blount County predates the state of Alabama. It was created by the territorial legislature from lands taken from the Creek Indians in 1814. Blountsville was established as the first county seat in 1820 on the site of an 1816 village called Bear Meat Cabin. One of the first Methodist missionaries in the Alabama Territory, Ebenezer Hearn, began his mission with a sermon here on April 18, 1818.

Blount Springs was the site of a fashionable mineral-spring health resort from 1843 to 1914.

During the Civil War a Union raid by Col. Abel Streight penetrated into Blount County in April and May 1863. Confederate Gen. Nathan Bedford Forrest's column attacked the Federal troops on May 1, 1863 as they crossed the Locust Fork River at Royal -- the so-called Battle Royal. Two local women, sisters-in-law Celia and Winnie Mae Murphree, were renowned for capturing three sleeping Union soldiers and marching them to a Confederate military camp.

Iron ore mined in Blount County contributed to the industrialization of Birmingham. John Hanby discovered a seam of brown iron ore in 1817. The mine was known as the Champion Mine from 1882. Shook and Fletcher operated both the Champion and the Taits Gap Mine from 1925 to 1967, supplying the Woodward, TCI, and Sloss furnaces in Birmingham, as well as the Republic Furnace in Gadsden.

The county seat moved to Oneonta in 1889 after Henry DeBardeleben and James Sloss bought land and succeeding in bringing the L&N Railroad into the county.