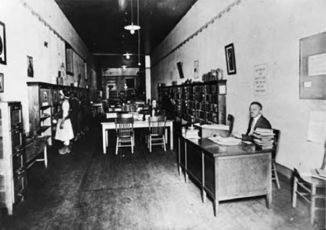 Interior of the Booker T. Washington library , with Reginald Gaines at his desk, in 1919

The Booker T. Washington Library was one of the first lending libraries in Alabama open to black patrons. The institution grew out of efforts by black teachers and principals in Birmingham City Schools. With the approval of superintendent John Phillips, they raised $350 to create a small lending library at Slater School in 1898.

The move to expand the Slater School Library into a public library was endorsed by Tuskegee Institute founder Booker T. Washington in 1913. More than $4,000 collected from individual donations and fund-raising concerts by school groups was turned over to the Birmingham Public Library Board in 1917.

With a small appropriation from the city, the board approved the expenditure of $1,500 for reading materials and $500 for furnishings. A storefront at 1715 3rd Avenue North was leased for $55 per month and Mattie Herd was given training in librarianship in Louisville and employed as a "library assistant" at $35 per month to supervise the branch. The library, originally called the Lincoln Branch, opened on October 9, 1918. There was no ceremony as public gatherings were temporarily prohibited due to a 1918 influenza pandemic.

In the spirit of Birmingham's segregation ordinances, the library board established policies that kept the resources of the Washington library entirely separate from the institution's other facilities, which were only open to white residents. Only the privately-raised funds were used to acquire materials. If a particular book was requested that was held in the main library, then that copy would be transferred permanently to the Washington branch. A new copy for the main library would then be purchased to replace it, using the "Negro Book Fund" which has been raised in the black community.

Within a few months, the Birmingham Public Library board decided that a male librarian would better serve the branch. Director Carl Milam hired the untrained Reginald Gaines at $75 per month. Within six months he was criticized for his failure to develop as a professional and for allowing a white patron to use the branch. Earline Driver replaced him in 1921.

In 1924 the library moved into ground floor space in the the newly-opened Colored Masonic Temple Building at 1630 4th Avenue North. The facility expanded into an adjoining one-story commercial space in 1927 and into additional rooms on the opposite side of the building's entrance in 1933.

In a 1953 report, it was noted that the Washington library had the largest book collection of any of the city's branch libraries, with its holdings reflecting the needs of the faculty and students of Miles College and Daniel Payne College. The report observed that the non-fiction books were rarely requested and that "perhaps its sights have been set to high." The report noted that the policy of the new branch librarian was to, "serve primarily the coming generation." The policy was thought not to impact the branch's "serious" patrons, as all volumes from the central library could be made available on request.

In 1956, the library's collection was moved to the newly-built Smithfield Library on 8th Avenue West, which was the first structure built for the specific purpose of housing a library for black patrons.