Difference between revisions of "Brookside"

Brookside (incorporated in 1896) is a former mining town of 1,340 located on 6.4 square miles in northwestern Jefferson County. It was predominantly settled by Eastern European miners and their families recruited by the Sloss Iron & Steel Company. The name is indicative of its situation along the banks of Five Mile Creek. Its post office (35036) was established in 1971. The current mayor is Roger McCondichie. 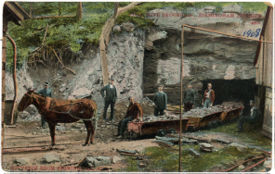 Coal mine entrance on a 1908 postcard

The area around Brookside was part of an 80-acre tract granted to farmer Samuel Fields in 1831. After the county began to industrialize, the Warrior Coal Fields below the area's farms became important to iron and steel manufacturers. The Georgia Pacific Railroad opened a stretch of rail along Five Mile Creek in the 1880s which enabled the development of mines nearby.

The Brookside mine was opened in 1886 by the Coalburg Coal and Coke Company and purchased a year later by Sloss as a source of fuel for their Birmingham blast furnaces. Advanced equipment installed at Brookside placed it at the forefront of mining technology in the Birmingham District at the turn of the century.

The town served as the headquarters for four Sloss-owned mines in the immediate area (Cardiff, Coalburg, Brazil and Brookside). Sloss, like other employers in the booming industrial expansion of the early 20th century, had difficulty recruiting skilled labor. Recruitment efforts extended internationally and Brookside became the home of many Slavak immigrants and their families who made their way to the mines. 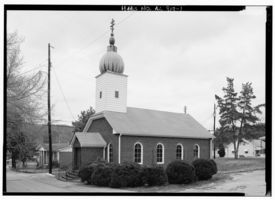 As Brookside became a destination for Eastern European miners in the area (they made up 37% of the town's population by 1910), the culture of the town reflected their ethnic traditions. St Nicholas Russian Orthodox Church was founded in 1894 and the S.S. Cyril and Methodius Catholic Church in 1895, both serving to strengthen community ties. The Brookside Social Club was founded in 1912 and held weekly dances as well as special holiday programs.

Nevertheless, the bustling town was known as a particularly rough area of the county, described by novelist Thomas Rowan as "a cocked gun of a town, hair-triggered, double-geared lightning and hell on the draw when it came to knives or guns, 'bottle-bust' fights or hairy teeth and fist and skull!"1.. Numerous saloons opened in town, catering to the diverse population of miners. In the 1890s the town was the scene of several violent conflicts between black and white miners. Cemeteries on nearby Tiger Hill were populated by victims of violence as well as mining accidents and disease. A historical marker, memorializing Jake McKenzie and Tom Redmond who lost their lives to violence in Brookside, was dedicated at the Sloss Furnaces National Historic Landmark in 2019.

A typhoid outbreak in 1899 was the first of a series of disastrous setbacks for the town. A tornado hit Brookside that Spring, and again in 1904. A fire destroyed numerous homes and businesses in 1900. Nevertheless, the town's mine continued to prosper. Mayor Wiley Burton banned the sale of spirits on Sundays shortly after taking office in October 1899.

Between 1910 and 1920, mining operations jumped around to several seams and the number of miners fluctuated between a low of 54 in 1910 and a high of over 600 in 1914. At its peak, Brookside boasted two movie theaters, three or four doctors, two drug stores, a French bakery and an icehouse. A new church building for St Nicholas was completed in 1916.

Brookside miners organized with the United Mine Workers of America and carried out a successful (albeit violent) strike in 1906, 1908 and 1920. The 1908 strike was marked by the Battle of Jefferson at the Jefferson Tunnel near Brookside on July 17. Thirty deputies were forced back through the tunnel by over 1,000 strikers, prompting Governor B. B. Comer to deploy the Alabama State Militia. A second general strike in 1920 resulted in the UMWA losing most of its influence in Alabama. Deteriorating conditions and better opportunities in the North led many of the town's miners to move away. Sloss-Sheffield determined soon later that the mine should be closed. It was shut down during the strike and never reopened.

In 1924, Brookside served as one of the settings for the Famous Players-Lasky Corporation's 1925 feature film Coming Through, which was based on Jack Bethea's novel Bed Rock. Silent film stars Thomas Meighan, Lila Lee and Wallace Beery stayed with local families during production.

Sloss removed all of the surface works after the mine shut down in 1921, but held on to the mine property. In 1952 Sloss merged with the U. S. Pipe and Foundry Company, which became a subsidiary of Jim Walter Industries in 1969.

In 2003 Five Mile Creek overflowed its banks and washed away most of the town's old commercial buildings and destroyed the Brookside Town Hall. Through its role in the Five Mile Creek Greenway Partnership and other initiatives, Brookside has made plans to build on its colorful history as well as its access to natural recreational resources to become a destination in western Jefferson County.

In 2008 a new Civic Complex was built to replace the Town Hall and other structures that were damaged in the 2003 flood.

In 2009 Cardiff resident Joseph Graham donated a shotgun-style mill house to the city of Brookside, which plans to use it for a historical museum. In September of that year the city annexed over 100 acres adjoining the Cherry Avenue exit from I-22, including the headquarters of the Birmingham Powder & Supply Company.

The Jefferson County Board of Equalization evaluated 395 homes in Brookside and determined that their average market value for 2007 was $82,704, a 4.4% increase since 2006.