Difference between revisions of "Brookside mine" 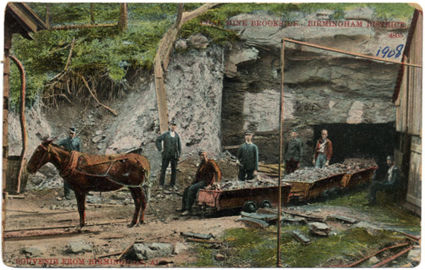 Coal mine entrance on a 1908 postcard

The Brookside mine was a coal mine in the Warrior coal fields which was opened in 1886 by the Coalburg Coal and Coke Company. It was purchased one year later by the Sloss Iron & Steel Company as a source of fuel for their Birmingham blast furnaces. The town of Brookside grew up around the mine as housing for workers and their families.

Following the practice of the time, the mined coal was processed into coke in rows of beehive ovens banked into the hillside below the mine opening. In 1897 a Robinson-Ramsey Coal Washer was installed, increasing the efficiency of coke burning and therefore the overall efficiency of the mine. Other advanced equipment was also installed at Brookside, placing it at the forefront of mining technology in the Birmingham District at the turn of the century.

Brookside served as the headquarters for four Sloss-owned mines in the immediate area (Cardiff, Coalburg, Brazil and Brookside). Because the capacity of Brookside's processing equipment exceeded the mine output, some of the slack from the Brazil mine was brought to Brookside for washing and coking.

Sloss, like other employers in the booming industrial expansion of the early 20th century, had difficulty recruiting skilled labor. Recruitment efforts extended internationally and Brookside mine became the workplace for many Slavak immigrants, some of whom brought their families to the town.

Between 1910 and 1920, mining operations jumped around to several seams and the number of miners fluctuated between a low of 54 in 1910 and a high of over 600 in 1914. In 1913 the mechanical coal cutters used previously were supplanted by hand picks.

Brookside's miners were organized with the United Mine Workers of America and carried out a successful (albeit violent) strike in 1906, and also participated in labor strikes in 1908 and 1920. The 1908 strike was marked by the Battle of Jefferson at the Jefferson Tunnel near Brookside on July 17. Thirty deputies were forced back through the tunnel by over 1,000 strikers, prompting Governor B. B. Comer to deploy the state militia.

A second general strike in 1920 resulted in the UMWA losing most of its influence in Alabama. Deteriorating conditions and better opportunities in the North led many of the town's miners to move away. Sloss-Sheffield determined soon later that the mine should be closed. It was shut down during the strike and never reopened.

Sloss removed all of the surface works after the mine shut down in 1921, but held on to the mine property. In 1952 Sloss merged with the U. S. Pipe and Foundry Company, which became a subsidiary of Jim Walter Industries in 1969.