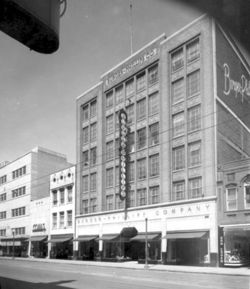 In 1979 the entire "Block 73", including the Burger-Phillips building, was the subject of a redevelopment proposal commissioned by Operation New Birmingham which proposed various options, including demolition. In the 1980s a renovation by architect Pedro Costa and investor Nelson Head transformed the retail building for office use. Two smaller buildings (including the original Burger-Phillips store) were demolished and a glass-and-steel atrium was built connecting it to the Kress building on the corner of 19th Street North. The combined project, with 140,000 square feet of Class B office space, was dubbed the Burger-Phillips Centre (later renamed the Atrium Center)

Between 2007 and 2008 a $6.8 million renovation of the building transformed the upper floors into 35 one- and two-bedroom apartments ranging from 700 to 1,390 square feet. The ground floor is being marketed for restaurant, retail or office use.

The conversion was undertaken by the Carruthers Real Estate Company with architectural plans from a collaboration between Emory Kirkwood & Associates and KPS Group. Golden Construction performed the work.