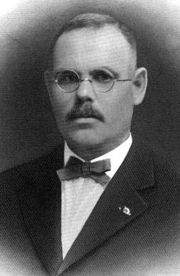 Charles Newton Carraway (born September 7, 1878 in Greensboro; died March 2, 1963) was a prominent physician and founder of Norwood Hospital, which was later named Carraway Methodist Hospital in his honor.

Carraway was the son of Benjamin F. and Sallie True Carraway. He attended the Mary Avery School in Greensboro and trained in pharmacology at the Agricultural and Mechanical College of Alabama in Auburn, supporting himself by picking cotton. His father, a former member of General Forrest's cavalry unit, died in 1899 and the family moved to Birmingham. Charles, the oldest of four siblings, supported the family as a pharmacist and attended Birmingham Medical College, graduating in 1902 and continuing his studies in New York, Baltimore, and Rochester, Minnesota.

After returning to Birmingham, Carraway took a position as assistant to R. M. Cunningham at the Employees Hospital of the Tennessee Coal, Iron and Railroad Company and also began a solo practice in Ensley and Pratt City, driving to patients' homes and Hillman Hospital in a 1903 Cadillac with brass trim. He married Maggie Lacey of Pratt in 1904 and had three children before her death in 1915.

In 1908 he built the 16-bed Carraway Infirmary in Pratt City, charging companies $1 per employee or $1.25 per family to provide for medical care as required. He remarried, to the former Frances Ashland of Kansas City, Missouri and had a fourth child by her.

In 1917 Carraway moved his hospital to a larger site on the corner of 25th Street and 16th Avenue North in Norwood. In 1926 he opened the Norwood Clinic, patterned after the Mayo brothers' clinic. With a large federal grant, Norwood Hospital added a nursing wing in 1949. Carraway turned over operation of the facility to his son, Ben after suffering a stroke in 1957.

Carraway died in 1963 and is buried at Elmwood Cemetery.