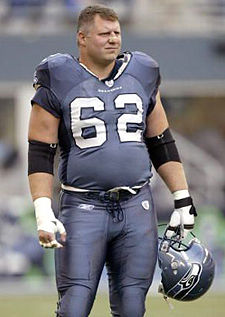 Christopher William Gray (born June 19, 1970 in Birmingham) is a former offensive guard for the Seattle Seahawks of the National Football League and was a member of the team when it played in Super Bowl XL in 2006.

Chris Gray attended Homewood High School where he lettered in football, playing tight end and defensive end. Shortly before his 2006 Super Bowl appearance, Gray cited the 1987 state 5A championship as the biggest game of his career up to then. The Homewood Patriots played Gadsden High, which had several injured players that season. Gadsden's players recovered in time for the game, however, and beat the Patriots 13-7.

In the 1993 NFL Draft, he was picked in the fifth round (132nd overall) by the Miami Dolphins. In 1995, Gray started for 10 games when he received an ankle injury that required surgery and kept him out the rest of the season. The following year he returned and started in 11 games before breaking his ankle and again missing the rest of a season. During his career, Gray has also required operations on his left knee and both hands.

In 1997 Gray signed with the Chicago Bears as a free agent. He signed with the Seahawks in 1998, where he played for the rest of his career. He began by playing center. In 2000, he started the entire season for the first time. In 2001, Gray moved to right guard. For most of 2002 he filled in for injured left guard Steve Hutchinson.

Between the 2004 and 2005 seasons, Gray considered moving to the San Francisco 49ers. After a plea from fellow player Robbie Tobeck and some soul-searching, he decided to stay. This turned out to be a wise move as, at the end of the 2005 regular season, the Seattle Seahawks went to the championship game, Super Bowl XL, the team's first Super Bowl appearance. Seattle ultimately lost the game to the Pittsburgh Steelers, 21-10.

During the 2005 season, Gray broke the Seattle Seahawks record for most consecutive starts in regular season games. The run ended in 2006 at 121 games. His record would have been longer if not for a thigh injury that kept him out of the final game of the season. It still remains the Seahawks franchise record for consecutive starts. He's also 9th for total games with the Seahawks with 145 played.

Gray returned as a starter for the next two playoff games. He retired from the Seahawks prior to the 2008 season because he was "at risk for paralysis because of a lower back and spine injury...."

Gray lives in Florida with his wife, Julie (who is also a Homewood graduate), daughter, Grace, and son, Matthew. He was inducted into the Alabama Sports Hall of Fame in 2015.