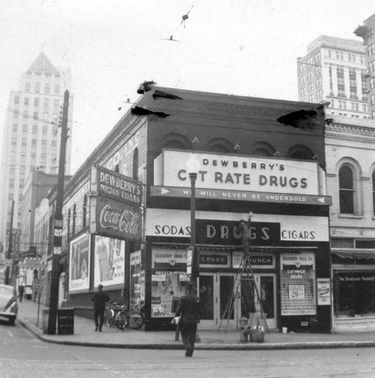 Dewberry & Sons acquired the business of H. H. Copeland in 1907 and was reincorporated, with J. M. Dewberry, W. G. Patterson, Copeland, and A. P. Dewberry as officers. The firm purchased a two-story building at 2031 2nd Avenue North, on the corner of 21st Street North from Amzi Godden Co. president Robert Lovelady.

In 1919 Lovelady resigned from the Jefferson County Board of Revenue to purchase the drug store in partnership with Eugene May and J. L. Yancey, thus resuming ownership of his former storehouse. The Dewberry Fields Pharmacy Co. was incorporated by A. P. Dewberry and J. E. Fields in 1920.

The business expanded into the newly-built Goldstein building on the corner of 3rd Avenue North and 18th Street in 1927.

Charles Meriwether, a political operative and ally of Albert Patterson, served as the company's executive sales director from 1945 to 1978. James McLane began working for the company as a pharmacist in 1950 and was president when the business was re-incorporated in 1960.

Dewberry Drugs opened their second location at Five Points West in 1958 and a third, in the Roebuck Shopping Center, in 1961. The downtown location closed in 1995 and the company was dissolved in 2002.