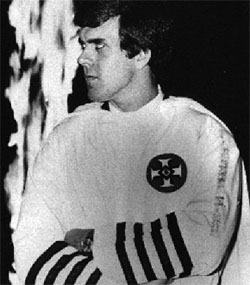 Black's childhood coincided with the major battles of the Civil Rights Movement in the South. He began handing out racist literature, including the White Power and the National States' Rights Party Thunderbolt newspapers to his Athens High School classmates. When the city school board banned in-school distribution of political literature, he began mailing the newspapers to his classmates.

In the summer of 1970 Black traveled to Savannah to campaign for National States' Rights Party founder J. B. Stoner in his bid for Governor of Georgia. As a member of the National Socialist Youth Movement, the youth branch of the National Socialist White People's Party (formerly the American Nazi Party), Black agreed to provide the NSRP's membership rolls to his organization. That perceived treachery provoked fellow campaign worker Jerry Ray (brother of James Earl Ray), then 16, to confront him and shoot him in the chest. Ray claimed self-defense and was acquitted.

Black transferred to the Madison Academy in Huntsville for his senior year, graduating in 1971. He completed a bachelor's degree at the University of Alabama in 1975 and joined David Duke's Knights of the Ku Klux Klan that year. He came to Birmingham as the group's Alabama organizer. After Duke's resignation in 1978, Black succeeded him as "Grand Wizard".

Black ran for Mayor of Birmingham in the 1979 election, finishing in 6th place with 1,771 votes (2.4%) in a race won by Richard Arrington, Jr. In April 1981 Black was part of a group of 10 would-be mercenaries caught attempting to sail to Dominica to help restore ousted prime minister Patrick John to power. Charged with violating the U.S. Neutrality Act, prosecutors argued that the true aim of "Operation Red Dog" was to establish an offshore haven for criminal activities and profiteering. He was convicted and sentenced to three years in federal prison. He spent his time in prison taking computer programming classes, and was released on November 15, 1984.

Black unsuccessfully challenged incumbent Howell Heflin as the Populist Party candidate for U. S. Senate in the 1984 general election. He resigned from the KKK in 1987.

Black launched the internet site "Stormfront" in 1995. It is considered to be the first major white-pride website and is still among the most-popular. The site published writings by David Duke, William Luther Pierce and the Institute for Historical Review. It has hosted downloadable graphics of white power and neo-Nazi symbols, and linked to other similar sites. The site appeals for readers to become supporting members by making monthly contributions to fund the site's operations. In 1999 he launched another site, "martinlutherking.org" to promote negative views of Martin Luther King Jr's legacy. In 2016 Black endorsed Republican presidential nominee Donald Trump for president.

Black's wife, Chloe, who was previously married to David Duke, worked as an assistant to Florida Crystals executive and real estate developer Pepe Fanjul, and as a spokesperson for a charter school. His son, Derek, hosted a daily talk show on WPBR-AM in West Palm Beach, Florida, for which his father was a financial supporter. The show ended its run in January 2013 and the younger Black has since renounced his white nationalist beliefs.