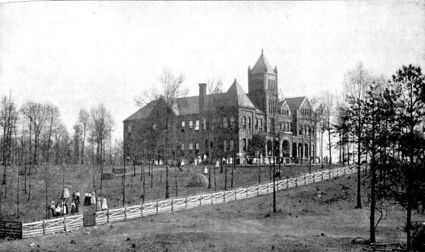 The East Lake Atheneum in 1894

The same building in use as the Orphans' Home in 1906

The East Lake Atheneum was a private girls' school chartered in 1890 and constructed on a hillside site, dubbed the "Atheneum Eminence," donated by the East Lake Land Company at 4th Avenue South and 82nd Street.

The school was organized by former Alabama State Superintendent of Education Solomon Palmer with the help of several trustees of Howard College, which was itself in the process of building a campus in East Lake. Robert Jemison Sr, president of the East Lake Land Company, was chairman of the Atheneum's board of trustees, with A. D. Smith as secretary and Capers Jones as treasurer.

The school, which offered preparatory classes to young women, opened on October 7 of that year with an enrollment of 180. The second year had fewer students, but enrollment rebounded after the completion of the large brick and stone Romanesque-style main classroom and dormitory building in late 1892. Two hundred and twelve girls entered school the next Fall, but the 1893 financial panic hit the institution hard, forcing it to close temporarily.

The site was purchased in 2001 by Birmingham City Schools for Ossie Ware Mitchell Middle School, which opened in 2006.