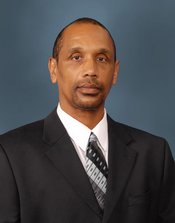 Edward Maddox (born c. 1956) is a barber, entrepreneur and is retired from Birmingham City Schools where he served as band director for Woodlawn High School. He also served as the District 4 representative on the Birmingham Board of Education from 2009 to 2012.

Maddox graduated from Carver High School and has a bachelor's degree in music education from Florida A&M University in 1979 and a master's in music education from Alabama State University in 1988. Beginning in 1979, Maddox taught music at Calloway, Moore and Patterson Elementary Schools before being promoted to band director at Woodlawn. Before retiring in 2007 he also organized a string orchestra and served as chair of the school's department of fine arts. Maddox also worked as a part-time instructor at Miles College. He currently owns and operates the New Creations Barber Shop and New Creations Event Room in Woodlawn.

Maddox ran unsuccessfully for the District 4 seat in the 2005 Birmingham City Council election. He was elected to the Board of Education in the 2009 election, defeating incumbent Carolyn Cobb. In 2012 Maddox led efforts to terminate the contract of city schools superintendent Craig Witherspoon. His motion to do so was withdrawn during a contentious meeting on April 10, 2012 after the board's attorney instructed him that it was out of order.

On October 16, 2012, Maddox was arrested on charges that he used his positions in the Woodlawn Neighborhood Association and the Birmingham Board of Education for personal gain. He was accused of voting in favor of neighborhood funding for his Woodlawn Missions charity while serving as neighborhood president and for voting to raise his daughter's salary while serving on the Board of Education. He agreed to plead guilty to misdemeanor charges and to resign from the school board.