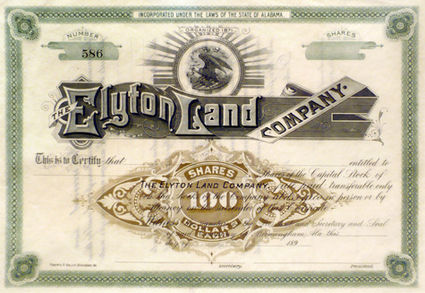 The Elyton Land Company was organized on January 26, 1871 in order to purchase land for, establish and promote the new city of Birmingham. The shareholders of the company were Birmingham's founders. Joined together under president James Powell and majority shareholder Josiah Morris, they raised $200,000 in capital and purchased property from William and Elizabeth Nabers on March 6. They platted streets and divided the blocks into lots, which went up for sale beginning on June 1. The company also established public utilities and zealously promoted the idea of a new southern industrial city through the national press.

With the establishment of the industrial Railroad Reservation in the center of town and prominent sites dedicated for use as park or donated to churches, the city began to take shape. The company built a hotel, the Relay House adjacent to the railroad and created the Birmingham Water Works to secure a source of water. By 1873 4,000 people in hastily erected cabins called the new city home. Powell led a stacked vote to cause the county seat to be moved from Elyton to Birmingham.

The events of 1873 nearly ended the project, though. A cholera epidemic followed by a national stock-market depression that lasted for six years nearly bankrupted the company. A proposal to sell off the company's investments was dutifully pursued and the shareholders were positioning themselves to minimize their losses. 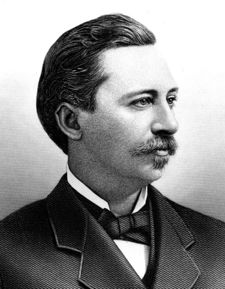 In 1875, during a period of great uncertainty for the company's survival, Colonel Powell resigned as president and Henry Caldwell was named to assume the office. By 1876 experiments with coking coal undertaken by others started to demonstrate the potential on which the Elyton Land Company had so far failed to capitalize. Once the process had been successfully demonstrated the company did agree to donate additional land to the newly-formed Pratt Coal and Coke Company on the condition that the coal company connect its coal fields to the main line through the city and sell to other manufacturers. They also donated the land on which the Alice Furnace was constructed, which re-launched Birmingham as a commercial success in 1880. The company finally emerged into the black in 1883 and used its land-holdings and available capital to encourage the building up of other foundries, furnaces and manufactures all along the Railroad Reservation. 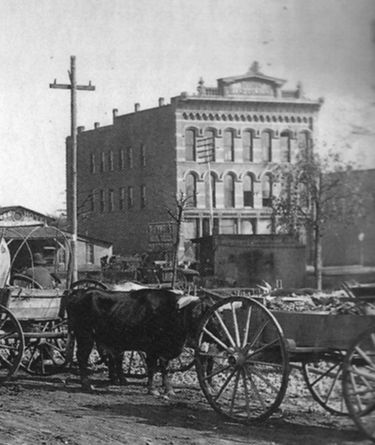 It was under Caldwell's direction that same year that the company began developing Highland Avenue and its streetcar line, the Birmingham Belt Railroad, and Lakeview Park. The two years following represented the great booming period of real-estate speculation in the city and the Land Company offices were kept busy each day pricing and drafting sales receipts for properties that were often sold hours later at sizable profit. While the company saw record profits, speculators made out like bandits. In 1885 the Elyton Land Company erected a three-story brick office building on the northeast corner of Morris Avenue and 20th Street North, across the street from the Relay House (which would be demolished for the new L & N Station the following year).

When the bubble burst, the company, like many other landowners who were no longer able to sell unimproved property for profit, undertook a program of building. In 1886 the company incorporated the Caldwell Hotel, which opened in 1889, to improve the state of lodgings in the city. It invested $1 million in a new rolling mill and other projects to cement the position of Birmingham as the primary industrial center of the South. In the same resolution, the company granted its president, Caldwell, a residential lot of his choosing on Highland Avenue. Shares in the company, which in 1873 had traded for as little as $15 were now being sold for $4,000 on the open market. The company re-invested in tapping the waters of the Cahaba River by building the Cahaba Pumping Station in 1887.

The Elyton Land Company building was demolished in 1952 and served as a parking lot for the John A. Hand Building until a new parking deck was built to support the renovation of the building as residences and offices for The Bank of Birmingham in 1997.

Presidents of the Elyton Land Company