Express Oil Change is a chain of southeastern car maintenance shops, both franchised and company-owned. Its corporate headquarters is located at 1880 Southpark Drive, just off the intersection of Valleydale Road and U.S. Highway 31, in Hoover. Although they provide a variety of services, including transmission service, tire rotation, brake inspection, and regularly scheduled maintenance, as their name indicates, the business specializes in fast oil changes. The first store opened in 1979 in Birmingham. As of 2018, the company has 114 locations in Alabama, Florida, Georgia, Mississippi, Oklahoma, South Carolina, Tennessee, and Texas.

In the late 1970s, Jim Lunceford, already deeply involved in the automobile service industry, heard of a business on the west coast that offered quick oil changes to consumers. He decided to perfect the concept, opening the first Express Oil Change in Birmingham in 1979. By 1984 there were four company-owned locations and the first franchise opened. In 1991, Express Oil Change moved their headquarters to 190 West Valley Avenue in Homewood.

In 1987, investor Ricky Brooks was approached by someone wishing to borrow money to open three Express Oil Change franchises. Brooks new nothing about the industry at the time, but was intrigued after researching it. Brooks' client ultimately decided against borrowing the money, so Brooks partnered with Joe Watson to open their own franchises.

By 1995, Brooks and Watson were the largest franchisers, owning 14 centers. Lunceford, now in his 70s and ready to retire, asked the two if they would be interested in buying the business. They agreed, with Brooks selling his investment firm and the deal closing in 1996. At the time, there were approximately 48 stores in the chain, 11 of which were company owned.

In 2005, Carousel Capital, a private investment firm based in Charlotte, North Carolina, purchased the majority stake in Express Oil Change, which had grown to 149 locations. Brooks and Watson were retained as CEO and COO, respectively.

In late 2006, Express Oil Change announced plans to move its corporate headquarters to their current location in Hoover. The new location, designed by the Garrison Barrett Group, took an existing 5,500-square-foot building, renovated it and added a 6,000-square-foot addition. Originally expected to open in May 2007, Maxus Construction Company announced completion of the job in March 2008. In addition, Express Oil Change added a new training facility to the nearby Cahaba Valley Road location, which is used to train both employees and franchisees. 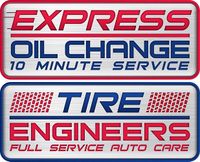 In 2010 Carousel sold part of its investment in Express Oil Change to Thompson Street Capital Partners of St Louis, Missouri.

The company acquired Birmingham-based Tire Engineers in 2013. By February 2014, the company had co-branded 20 of its corporate stores with the Tire Engineers name with plans to do an additional 40. Franchisees would also be given the opportunity to co-brand their stores, if they wished. No separate franchises of Tire Engineers stores would be offered, but the seven stores acquired by Express Oil would continue to be operated without co-branding.

In 2017 Carousel sold another stake to Golden Gate Capital of San Francisco, California.