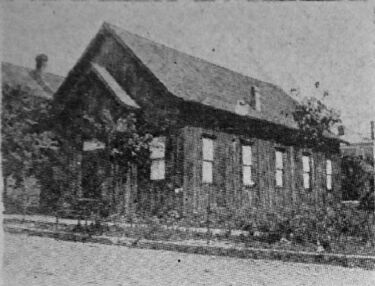 The 1888 "Tabernacle," constructed during the ministry of R. W. Van Hook 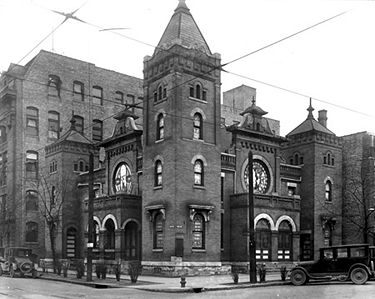 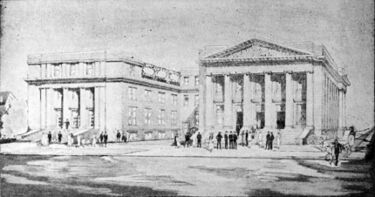 Rendering of the new buildings planned in 1925

The First Christian Church is a congregation of the Disciples of Christ located at 4954 Valleydale Road in Meadow Brook. The church's pastor is Troy Tatum.

The church was founded by Colonel J. J. Jolly soon after he arrived in Birmingham with his family in 1874. Other charter members of the group that met in private homes included the families of Leven Goodrich and D. W. Austen. They arranged for sermons to be delivered by traveling ministers and eventually rented the Cumberland Presbyterian Church for a series of meetings in 1876 that concluded with the organization of the First Christian Church.

In 1878, after the Jollys and Goodriches had left town, the small congregation withered. In the winter of 1885, a small group of women organized a Sunday School and held meetings at Sublett Hall. The congregation was formally reorganized in April 1885 and met at various locations including the Downtown YMCA, the Jefferson County Courthouse, and the Hood Building.

Robert Van Hook was called from Greene County to serve as pastor. Susan Jolly (J. J. Jolly's widow) and her daughters returned to town by 1885 and their younger daughter Mary married Van Hook, who moved into their home until he was called to a pastorate in Danville, Va., in 1889. In 1888, a small wooden church was erected on a lot at the corner of 6th Avenue South and 21st Street, called "the Tabernacle". Van Hook describes it in the following way: "The building is of Queen Anne style, 36x60 feet, with the entrance on one side and pulpit on the other. The pews circle around the pulpit, bringing the audience very near the speaker. The trestling of the roof is all exposed, finished in sky blue and oak colors. The church is painted olive green, trimmed with a lighter green. The building, consisting of the auditorium, only cost about $3,800; when completed, the whole will cost about $5,000".

In January 1890 James Sharp came to First Christian and helped initiate a campaign for a new house of worship that was realized in the late 1890s under a later minister, Oscar Pendleton Spiegel, with the purchase of a lot at 5th Avenue North and 21st Street. A second wooden tabernacle was built there, but did not long meet the needs of the growing church. It was rebuilt as a more substantial red brick structure, seating 800, in 1903.

In 1924 the congregation sold that building to the developers of the Redmont Hotel. They erected a massive marble and granite-clad classically-styled education building at 7th Avenue North and 21st Street. That structure hosted sessions of the inaugural convention of the Southern Conference for Human Welfare in 1938.

The Great Depression delayed plans for a sanctuary building adjoining the education building until 1954. The new building, designed by Lawrence Whitten & Son, was completed in 1957 and featured a prominent four-sided steeple facing the Jefferson County Courthouse. The massive neo-classical nave was anchored with corner piers and the entranceway was set deeply in a broken-pediment-crowned alcove. The education building was added to the National Register of Historic Places in 1980.

In 1981 the church began a move from downtown to Valleydale Road by erecting a family life center. It completed a new sanctuary there in 1989 and the former buildings were sold to the county. The buildings were used as extra courtroom space until the Jefferson County Family Court and Jefferson County Courthouse Annex was completed. They were then demolished for surface parking.