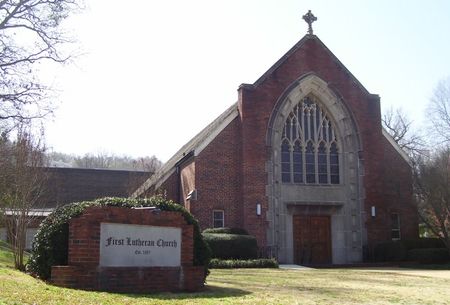 Reverend Charles Burkart of Garden City, in Cullman County, began delivering Lutheran sermons in Birmingham on January 2, 1886. He continued conducting services at the Methodist church every other Sunday at 2:00 p.m. until October 1887, when the Zion Lutheran congregation was founded. Services were conducted primarily in German. The first pastor was C. E. Scheibe, who had graduated from Concordia Seminary earlier that year.

Members of the congregation wished to construct their own church, but property in the newly-founded city of Birmingham was expensive. A congregation member, J. William Schaefer, donated a lot in Elyton for the church. Construction began in fall 1888 by members of the congregation and the building was dedicated by Pastor Scheibe in October 1889. This first church was a frame structure measuring 27 by 55 feet, costing $1200.

The following month, Scheibe answered a call to Cullman, but continued to preside at Zion Lutheran in Birmingham once a month until September 1895. At that time, Reverend Alfred Moeller was ordained and became Zion Church's second pastor. Moller organized the Ladies' Aid Society in 1896 before accepting a call to Ohio in 1900. In 1899 the congregation began discussing selling the current church in order to build a larger facility.

In September 1900, another newly graduated seminary student, Henry Heise, became Zion's third pastor. Discussion of the need for a new church resumed in 1901, but a devastating tornado caused severe property losses to church members. A call for donations throughout the Lutheran community to help the Zion congregation went out and was answered, allowing a new church, dedicated on October 12, 1902, to be built at Avenue B and 19th Street South. The old church was sold to a bank, which sold it to an African-American congregation who named it German Colored Baptist Church. An existing house on the church's new lot was used as the parsonage and for church services during construction. Heise answered a call to Missouri in 1906.

It was over a year before a new pastor, Reverend Hans Reuter, was installed on March 19, 1911. Later that year, a new, brick school and fellowship hall was built adjacent to the church. During World War I, because of anti-German prejudice, German services were discontinued entirely in favor of English, although German services were resumed in 1919. From 1921 to 1947, the church published a monthly paper called The Chronicle, which was sent to all church members.

In 1923, a building fund was begun to build another new church, as membership had continued to grow. In July 1929, the congregation purchased a lot at Cotton Avenue and McConnell Street. Unfortunately, many members found themselves unemployed during the Great Depression and the church defaulted on the lot in 1932. From 1932 to 1934, the church ran a branch Sunday School in Roebuck Highlands.

The congregation again looked to build a new church in 1939, but these plans were disrupted by World War II. However, due to problems with the church's pipe organ, it was replaced by an electronic organ, one of the first installed in a Birmingham church, in 1944. In 1948, 69 Zion Lutheran members left to start Trinity Lutheran Church in West End.

In 1949, the lot the church currently stands on at Highland Avenue and Caldwell Avenue was purchased for $15,000. The design of the new building was created by Charles McCauley. Construction was begun in 1950 at a cost of $80,000, with another $70,000 for furnishings and equipment. The new church, now called First Lutheran Church was dedicated on May 13, 1951.

Additional property was purchased for expansion in 1958. Pastor Reuter finally retired in 1961 after 50 years of service. Reverend Martin A. Buerger became the church's new pastor on July 16, 1961.

On May 5, 2008 the church, along with its sister congregation Emmanuel Lutheran Church in Shelby County voted to combine the two congregations. A committee has been formed to decide on which site to keep and which site to sell.